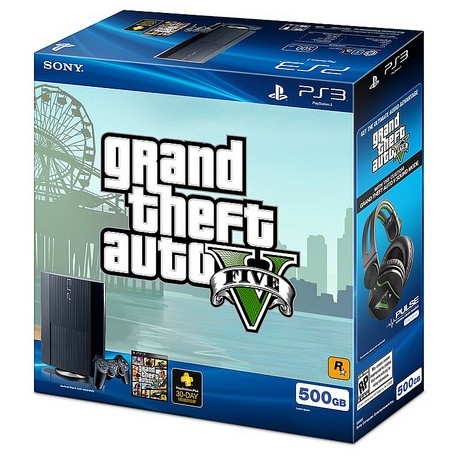 Great news for PlayStation 3 users. Sony has announced a PS3 Grand Theft Auto V bundle. Included is a copy of the game, a 500GB PS3, and a Pulse headset, it is a custom-designed Grand Theft Auto V Pulse wireless headset, so you can enjoy the game’s many unique radio stations and in-game soundtrack with crystal clear sound.

The package will hit in September alongside GTA V .Since the announcement of pre-orders for the game. Gamers have been going to stores and securing their copy of the game. The PS3 bundle also comes with a 30 day trial of PlayStation Plus, and anyone who pre-orders GTA V from PlayStation Network gets 75% off any other Rockstar title.

GTA V is said to be much bigger than GTA IV, Red Dead Redemption, and GTA: San Andres combined. and instead of the game just having one playable character you will be able to play 3 characters, each of them to have their own unique personalities.

You can pre-order you GTA V bundle now. Have you made your pre-order for GTA V yet? If you haven’t you should do it now September 17th just around the corner.