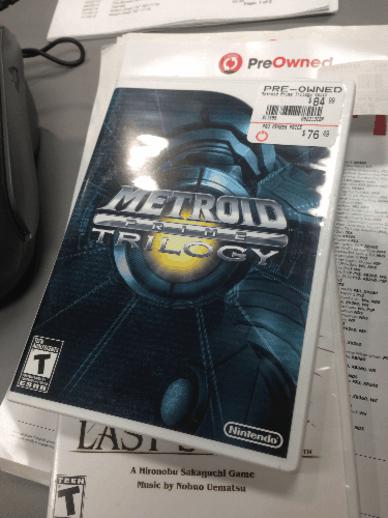 A couple of weeks ago Gamestop happened to find an unsold cache of Xenoblade Chronicles, and they decided to sell the JRPG at a ridiculous price. 85 dollars ridiculous. They claimed that they have every right to sell it at that specific price, pre-owned of course. But it was then discovered that these copies were represses, due to markings on the disc and game box. Gamestop made the decision to sell these to maximize profits.

This was obviously met with heavy fan backlash. The video game chain, which recently was forced to close down more than 50 stores, was criticized by both the press and the fans. It seems as though they are at it again, this time with another Wii game. The Metroid Prime Trilogy will go on sale for $84.99 tomorrow. To add to the fire the pre-owned copies won’t even come with steel book cases, which were included with the game for U.S customers.

How could this be happening? Well there are a couple of things to consider. For one Gamestop could really be hiding games, waiting for them rise up in value, and then sell them. Or Nintendo itself could be printing out disc less copies of the game. The latter is probably unlikely but who really knows at this point.

Gamestop isn’t particular popular amongst the gaming community. Developers despise the chain, and gamers would rather order online than to walk into to the store to purchase their games. The future is also looking like it will be heading towards digital only. So selling games at ludicrous prices won’t do Gamestop any good. Why they would do it, only God knows? As I don’t see many people wasting $85 dollars for an old copy.

This was first discovered at a NintendoAge forum.