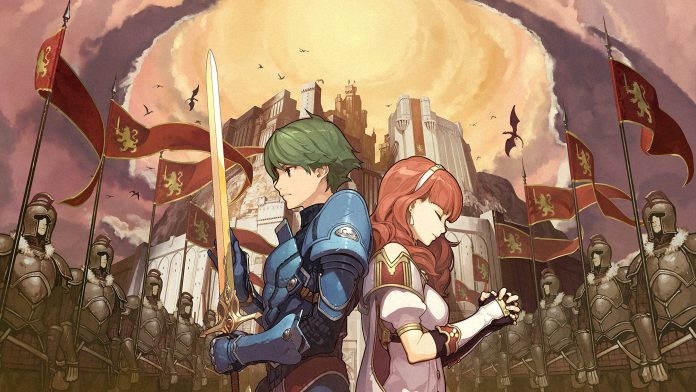 Welcome back, strategy RPG enthusiasts! It’s been a year since the last Fire Emblem game, so we’ve been ready for more. We’ve recently gotten our hands on Fire Emblem Echoes: Shadow of Valentia for the 3DS and we dove right in. Here’s our first impressions with some very tiny spoilers – no big ones though, so don’t worry!

For those who aren’t familiar, Echoes is actually a remake of Fire Emblem Gaiden, the second game in the franchise. It was released exclusively in Japan on the NES, much like the earlier titles in the series. It’s considered by many fans to be the odd duck of the series, thanks to some gameplay mechanics that are unfamiliar to the series in general. Having never played the original game, this was our first experience with Fire Emblem Gaiden, so we were excited to check it out!

First off, there is no weapon triangle. Considering the very first Fire Emblem didn’t have one either, this won’t be a surprise to diehard fans, but it definitely was for us! The base of future Fire Emblem combat consists of a weapon triangle. Swords beat axes, axes beat spears, and spears beat swords. This mechanic added another layer of strategy to the already deep gameplay, and it gave you another aspect to think about when positioning your units. In Echoes, this mechanic seems to be missing in action. You can now attack a spear unit with a sword unit without a disadvantage. We’re not too sure how to feel about it yet, but there are some instances where counters are still very apparent. For example in one of the early levels you’ll face off against a unit with a shield. Physical attackers won’t have much luck against him, but a mage’s magic will power right through his defense. The game even blatantly warns you beforehand that the level will be a challenge if you don’t have a mage with you.

Secondly, there are first & third person exploration sequences! This was actually a pretty welcomed surprise. When you’re not out in the open fields waging war against ruffians and bandits, you’ll be exploring towns and cities. During these parts you’ll be in a first-person examination mode that feels like it was taken right out of Capcom’s Ace Attorney games. You can even find useful items and weapons lying around! In addition to that, there are various dungeons scattered throughout the continent of Valentia. Upon entering these dungeons, the game will shift to a third-person exploration mode, where you are in full control of your character. Enemies can actually be spotted during this mode, and traditional Fire Emblem combat won’t initiate if you manage to slip past them, much akin to a modern action RPG.

We’re not too far into the game yet but those are the things that stood out the most to us. There are some more gameplay changes, like weapons having no durability and magic being cast from hit points. There’s even a mechanic that lets you turn back time, in the event of a bad turn. Overall though, Echoes is shaping to be a worthy entry into the legendary series.