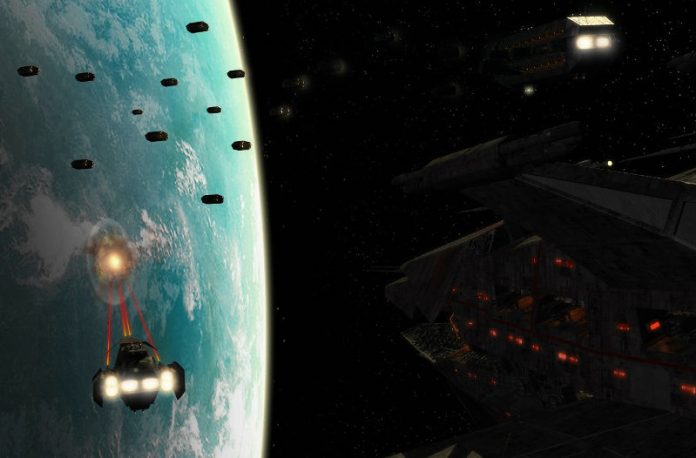 Players can choose from one of four races; Robust humans,  attack oriented Kirzaka, energy based Navitas or industrially heavy Silex. Each race starts in one corner of a galaxy map, with the aim being a race to Core Prime, the center of a vast machine foe responsible for the destruction of much of the culture of the other four races. Players will need to battle both the computer controlled Core forces along with opposing races in an effort to hold the centre of the galaxy for a set period of time and win the game.

The scale in mind for Galactic Domination Online is absolutely massive, with player numbers for a galaxy intended to number in the thousands across upwards of 400,000 planets. Players will be able to establish colonies on these planets to gather resources and grow their population. The option also exists to create, upgrade and configure ships in order to wrest control of planets from other players.

While the potential gameplay shown in the page video is cheesy, it gives a bit of a hint as to how the game will utilise social elements. Using a “contact” option, players will be notified if anything major happens in game, allowing them to rapidly check in on the game and ensure they aren’t hit by any surprise attacks. Players will also need to forge alliances and co-ordinate with others if they want to succeed in Galactic Domination Online.

After two years of development,the basic technical elements of the game are done, but Cool Queue Studios are hoping to raise $600,000 over the course of 50 days in order to finish Galactic Domination Online. First on the list is art, with a whopping 5600 hours of man time planned for the title. The funding will also go towards the implementation of game systems and content generation for characters and lore. Web design and testing are also high on the list of things that Cool Queue Studios aims to finance through the Kickstarter campaign.