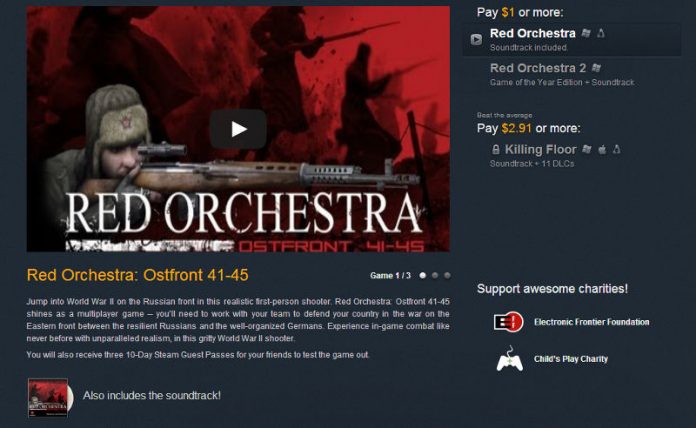 The Humble Bundle today announced another deal, this time for games published by Tripwire Entertainment.

For literally any price you can get your hands on two games: Red Orchestra: Ostfront 41-45 puts players on the Eastern Front of WWII, where they can experience the intense battles that took place between Germany and Russia. Red Orchestra 2: Heroes of Stalingrad builds on the realistic gameplay of the first title, with players needing to make maximum use of cover. Much like in real combat, death can come at any moment with a single shot, and health is not restored if the player takes damage. Red Orchestra 2 also features a single player mode that details the Battle of Stalingrad.

If you pay more than a dollar, you’ll receive access to both games on Steam, along with the soundtracks of both titles. Tripwire has also included limited time passes with the Steam copies of the game, allowing your friends to try out the game. These passes are apparently flying fast and furious on the internet, so if you’re unsure about buying into the bundle you can always ask on a site like Reddit and trial the games first.

If you pay over the average (At the time of writing situated at $2.91), you’ll get access to Killing Floor, a co-operative shooter that pits teams of six players against waves of “specimens.” On top of the base game, players also get access to 11 of the DLC packs for the game: Outbreak, Nightfall, PostMortem, “London’s Finest,” Steampunk, Steampunk 2, Ash Harding, Urban Nightmare, Harold Lott, The Chickenator and the Community Weapon pack. Unfortunately however, the Robot Skin and Golden Weapons pack aren’t included in this bundle.

As with Red Orchestra, players will also receive the soundtrack and limited time passes that can be gifted to friends.