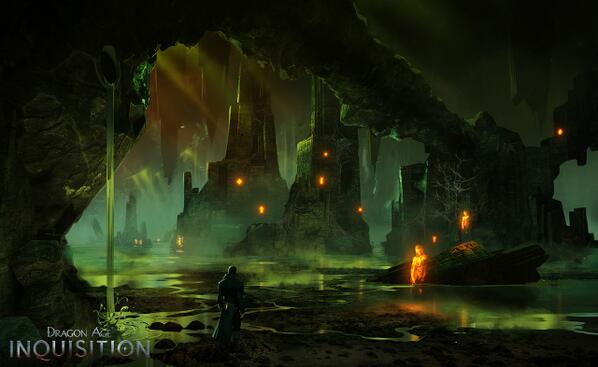 Concept art images released by Bioware indicate that Dragon Age Inquisition will feature a wider and richer fantasy world. Inquisition will explore a superior amount of environmental themes, contradicting the previous two games, where players could only explore a few city zones, dungeons and forests. The third game will introduce new scenarios like frozen mountains, swamps, ancient prisons and tombstones. According to Bioware, the upcoming corruption will spread quickly across all provinces of Thedas and soon enough, there’ll be nothing but bones to remember the glory days:

And their bones shall spread across the land, the remains of an empire lost to folly.

Inquisition’s narrative introduces a new war between races and with Darkspawn back to where they belong it’s more than natural that environmental exploration becomes greater and more diverse. After all, humans, elves and dwarves don’t exclusively live underground in dungeons, caves or inside the walls of main cities. There’s still a lot to be uncovered but fortunately, it seems that Inquisition will finally display Thedas’ at its full potential.

For the first time, we’ll be seeing Dragon Age stepping into Mother Nature’s diversity. In previous games, natural environments were extremely limited. In fact, apart from forests and green places I can’t remember any other themes. Inquisition will explore all types of microclimate scenes, from arid deserts to frozen mountains and from dense forests to clumsy swamps. Weather effects will also vary in each environment, which will create an even more immersive experience.

The previous games only focused on two provinces, Ferelden and the Free Marches. But there’s many other territories waiting for their turn to be explored: Anderfels, Nevarra, Orlais, Par Volleu, Rivaia, Seheron, the Tevinter Imperium and The Dales. Apparently, Inquisition will only feature five provinces, in which two of them are already well known: Ferelden, the Free Marches, Nevarra, Orlais and The Dales. By other words, Inquisition will explore all the south part of Thedas. No wonder the multiplicity of environments will be so substantial, the map speaks for itself, there’s indeed all type of climates in the south.

What’s even more exciting than alternative nature places is the fact that Inquisition will introduce a new series of medieval locations, including altars, ancient prisons, massive fortresses and other divine structures. It’s time to unveil Thedas’ true magnificence. In the third game, players will struggle for power in various regions of the map, that’s how the Inquisition will be maintained.

By securing strategic points like strongholds and fortresses, the Inquisitor will be securing the organization’s best interests. But that’s not everything the Inquisitor will do, the hero will also journey into the unknown and quest towards specific objectives, therefore the mythic and ancient location unveiled by Bioware.