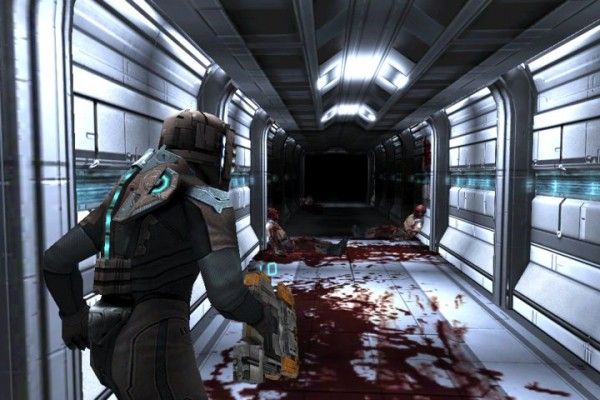 In honor of the release of Dead Space 3 for the major consoles I thought I would turn my attention to one of the smaller more mobile ones in order to get my space horror fix: my phone. And before we begin, yes I am aware that the game is rather old. However with the new game being released many people will head back to play the 2nd game in the series in order to remind themselves of the story line. Also for those unaware of the game already, this will hopefully introduce them to some good old fashioned limb removing fun.

Dead Space for mobile is a sort of go-between for Dead Space  and Dead Space 2. You play, not as Issac, but as a character code named Vandal (a newly converted Unitologist) who is sent to the Sprawl by the church for unknown purposes. As you are taught how to play the game, these purposes finally come out as sabotage to unleash the Necromorph horde onto the Sprawl. As such you then spend the rest of the game battling to redo the evil you have unleashed onto the unsuspecting victims of the Sprawl.

Now then the gameplay itself.

The game does look very good, considering that it is played on a touch screen mobile device, although some older handsets may struggle with it.The touch screen controls are as you would expect them in a touch screen game with one area of the screen for movement and another for looking around. However because of the limitations of a screen and no buttons it can come across as a little clunky. Sometimes it can feel like you are struggling to look around for the enemies and get them in time. Although on some occasions this only adds to the tense horror. Word of warning, Smaller screens may struggle due to the controls being squashed into small places. It also features a version of the upgrade paths found on the original games, so you can upgrade your rig and weapons as you collect power nodes, as well as purchasing items form the shops located throughout the game.

The Necromorph horde itself contains 7 different types of enemies, ranging from the basic Slashers and Crawlers to more dangerous ones such as the gigantic brute and finally the gigantic “Boss” all in their gory glory. The game features the staple “strategic Dismemberment” that has made Dead Space what it is today and keeps the variety up through the game with contextual based attacks such as stomping on the enemies that have no legs to the close quarter struggles you go through when the Necro’s get a little to close for comfort.

All in all the game is a very solid attempt at bringing the horror of Dead Space to the mobile devices and should provide a few hours entertainment at least for the few Pounds/Dollars that you will drop for it. The game also only takes up 1gig or so memory at most so even those with smaller memories can enjoy it. Overall I would definitely recommend this game to those who have enjoyed the Dead Space series so far and wish for a little back story and even those who haven’t played it much but wish for another mobile game to keep them going on their travels.