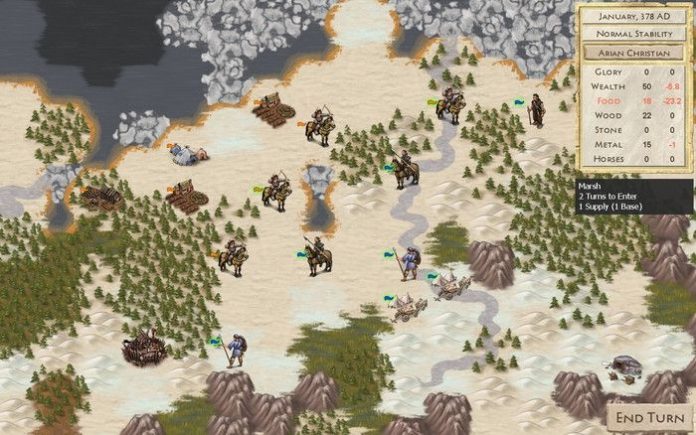 Before you start jumping around in joy that Firaxis is developing a new game, let me give you the bad news: they are not! However, Civ 5 lead designer Jon Shafer is working on a new hardcore strategy/RPG game titles At the Gates, together with his newly formed studio, Conifer Games.

Although the project is extremely ambitious, it is an indie game that we’re talking about here, one that is seeking funding on Kickstarter, with a pretty low goal of $40,000 set (and almost reached after just a couple of days).

At the Gates (which does seem to borrow a lot from Civilization), puts you in the shoes of the leader of a Barbarian tribe and your ultimate goal is to destroy the Romans. Set in a world where the times of the year will affect the terrains (expect floods, heavy snows and so on), At the Gates has you start small, as a tribe learning from the Romans and trading with them and challenges you to grow big and eventually destroy the Romans. A challenge we’ll surely love to take!

The Kickstarter page also shares with us the main features of the upcoming game and I am sharing them with you below:

– Adapt to an ever-changing landscape as the seasons change. Craft plans where you not only survive but hope for fields to dry up, marshes to flood and rivers to freeze solid.

– Build a robust economy by finding and exploiting new resources. Deposits slowly deplete so you need to always be on the hunt for more – even if they belong to your neighbors. If none are nearby, a better option might be to migrate your entire tribe to a different part of the world!

– Vanquish enemies on the battlefield by deftly maneuvering around them and destroying their chains of supply. But make sure your own are protected, as tactical victory means nothing if your armies then starve to death!

– Forge lasting diplomatic relationships with other leaders by lending them a hand in times of need. If Attila’s people are starving, sending him grain might earn you a friend for life.

– Fight or cooperate with the Romans – and become more like them. Barbarian kingdoms become more “Romanized” and gain access to powerful new technologies as they interact with the two halves of the Empire.

– Play on a geographically accurate map of Europe or 100% randomly-generated worlds.

– Lead one of eight factions, each with unique strengths to take advantage of and challenges to overcome.

Here are the first 15 minutes of the game played by the developers (but have in mind that this is not the final product and a lot of polish and probably new features will be added):

So, yes, I think that we can agree that even though visually At the Gates look like a cheap clone of Civilization 2, the features and overall concept are very exciting and I, personally, can’t wait for the game to be released!