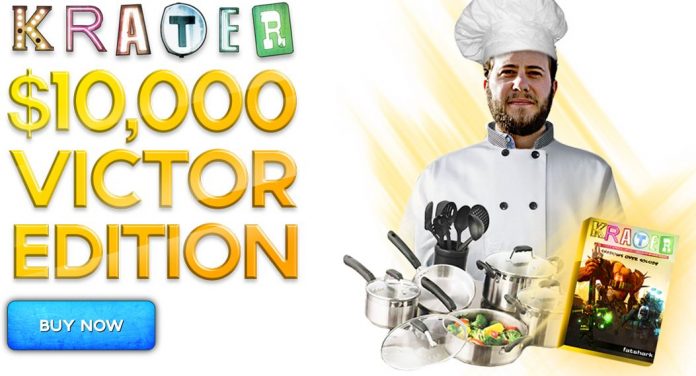 I have already told you about the upcoming indie post-apocalyptic RPG game Krater which most likely will be one of the most pleasant surprises of the year. But what I didn’t tell you (because just now I found out) is the fact that you can buy Krater for $10,000.

Yup, that’s not a lie: the Krater $10,000 Victor Edition is really up for grabs from the Swedish developer’s website and they have an interesting bonus to the buyer, which unfortunately does not include 10 scantly clothed women ready to do everything you want them to do while you play Krater.

Instead, the Krater $10,000 Victor Edition will give you… a Swedish meal cooked by Krater Game Designer Victor Magnuson, who will come at your door (anywhere in the world) to personally deliver the game copy and… to cook you a meal before playing Krater with you for a few hours. If you don’t believe me, check out their official website!

This is pure madness, I might add, but a nice marketing idea (at least) for the Krater developers: not only that this insane edition will draw media attention, but also if anybody wants to actually spend the money to help the developers, it’s fair game to them.

So… what are your thoughts on this $10,000 Victor Edition of Krater?