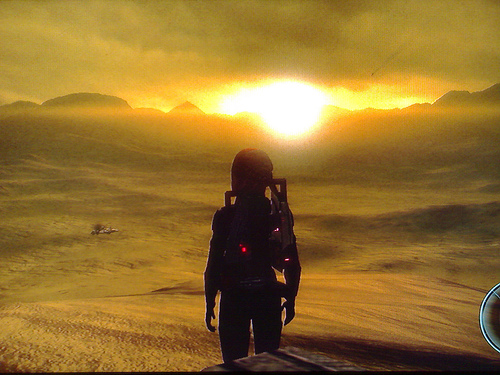 A few years back some guy made a chart he titled “RPG Cliché Chart”, purporting to show all the repeating story elements we’ve seen in bestselling Bioware (hereafter referred to as Bware) games over the years. It wasn’t particularly mean-spirited. He was just a fan looking to get a laugh, and most people, yours truly included, did indeed find it very amusing. I’ll tell you one guy who didn’t laugh though—Patrick Weekes, a senior staff writer over at Bware. He cooked up a lengthy retaliatory post, which was harsh enough that he later felt compelled to issue an apology over it.

However, the post he wrote was very enlightening. Instead of denying the accusation, Weekes’ defended the structure he and the writing staff used and referred to it as “Intro, Four Planets, Finale”. According to Weekes this structure has three advantages for Bware:

1) It’s easy to organize from a design standpoint.
2) Players in QA tests consistently understand it, and are not overwhelmed or intimidated by it.
3) It works.

Those first two arguments are design related and fruitless to debate. The third is interesting though, and worth looking into. Does it really work? A few weeks I ago I finished playing through Baldur’s Gate II: Shadows of Amn, arguably the company’s most famous work, and it certainly doesn’t use the Weekes formula. But then, it’s a different style of game, isn’t it? Starting with Knights of the Old Republic, Bware’s games zoomed in on fully voice acted and developed characters instead of the grand epic and expansive settings we’d grown accustomed to from their Infinity Engine RPGs. Genre fiction typically obeys a common structure. Weekes’ response mentioned romance novels as an example. So why not a Bware game?

Speaking for myself, my feelings on the subject are mixed. On the one hand, some of my most memorable gaming experiences have come from this company. Mass Effect 2 in particular is an all-time favorite and my 2010 Game of the Year. My Steam profile indicates I’ve put 180 hours into Dragon Age: Origins (where does the time go???). That said, I know for me personally, I couldn’t shake the nagging annoyance in the back of my mind, especially while playing Origins and Mass Effect 2, that I’d done it before. I was reading the previews for Mass Effect 3 a few weeks ago I couldn’t help but think to myself, “Oh. Great. We’ll fly around space, gather up our armies Origins style, and then bring them back to Earth for the great Reaper Stomp of 2012.” At which point I honestly felt guilty because, hell, I do love Mass Effect, and what’s more, I recognize I’m completely ignorant as to how ME3 will turn out. It may very well surprise me.

When I first played Knights of the Old Republic the structure worked for me—it was my first post-Baldur’s Gate Bware game after all. Over time I’ve grown more wary. More wary of the “Weekes Formula”, if I’m allowed to call it that. This development has been gradual but noticeable. What’s more, I see very few others ever mention having an issue with this, and so there exists a possibility I’m all alone on this one.

I think there’s a reason why I went back and replayed Baldur’s Gate II recently. I’m craving novelty, and a sense of true artistic passion. Over the last decade the production values of games has skyrocketed. They’re flashier than ever before, and their voice acting ranks are often choked with celebrity talent. Weekes said it himself, “Four Planets” works in the design phase because it keeps things manageable, and were it otherwise I’m sure the project would overwhelm the designers. Games are getting bigger and more expensive, but I can’t shake the feeling they’re also feeling more claustrophobic.

ME3 releases very soon now. I have it preordered and preloaded. I’m all ready to “finish the fight” as that Xbox cyborg would say. I’m pretty sure I’ll have a good time with it, but I’m a worried it’ll stick too close to formula, and leave me with an even greater sense of weariness. I hope it doesn’t. I want it to knock me flat on my ass, and have me back here eating my words and praying to Ray Muzyka for forgiveness.