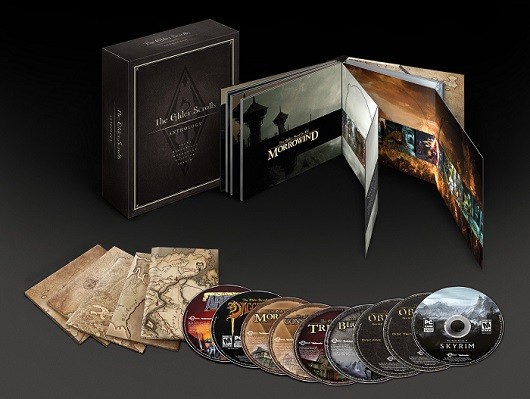 If you need some Tamriel adventures to hold you over until The Elder Scrolls Online is released, Bethesda will be releasing a special Elder Scrolls Anthology collection for PC on September 10th for the cost of $79.99. The compilation will span the five-game series and will include official add-ons, such as Skyrim‘s Hearthfire, Dawnguard and Dragonborn DLC packs. Yes, you will be able to play through all five of these extremely long and amazing games (Arena, Daggerfall, Morrowind, Oblivion, and Skyrim) for a little more than the typical price of a new game.

Not every single game in the series is included in the collection. The four The Elder Scrolls Travels cell phone games and An Elder Scrolls Legend: Battlespire are missing from the package. Bethesda says this would be the first time it’s put together a PC collection of The Elder Scrolls games, which began with Arena‘s launch in 1994.

The Elder Scrolls Anthology will also feature five physical maps depicting the lands of Tamriel, Iliac Bay, Morrowind, Cyrodiil and Skyrim. For anyone that has missed out on the series so far or has only played Skyrim, this would be a good investment. There is also a mod out for Morrowind now that updates it’s graphics to be comparable to that of Oblivion. That is also something that I highly suggest looking into.