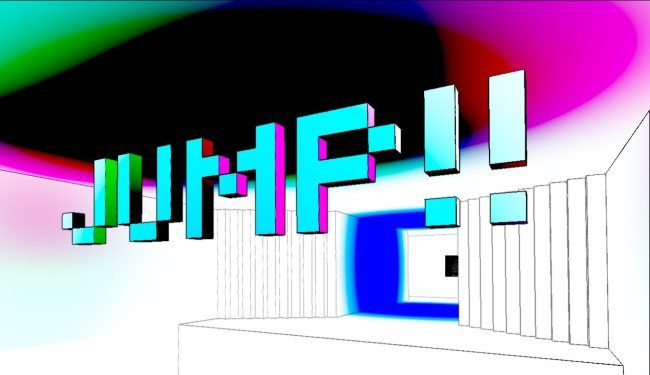 Antichamber makes great use of the opportunity video games offer — to create interactive universes alternative to ours. Whereas most of other projects focus on delivering worlds rich in history and culture while trying to imitate as accurately as possible physical laws similar to the ones we discovered, Antichamber does just the opposite — we learn nothing about the place we are in, and the basic principles here are fundamentally different from what human brain is accustomed to.

First of all, you should forget about any constancy. The walls may look solid and the floor stable but they can disappear or reappear any moment. The game frequently takes the advantage of the limited first person perspectve manipulating the level structure when it is out of your sight enhancing thus already overwhelming feeling of perplexity. Entering the room does not guarantee that you will be able to return to previous one because the door you have just entered through have dissipated or are leading to a totally different place. Here your view can literally change the world around you; even looking in appropriate direction can take you to a totally different places.

Spatial sense is of no use — corridors can lead to places you least expect, helpless running in circles is fairly common occurrence and going back is often the only way forward. In Antichamber the non-physical geometry dominates over the Euclidean one making this world an unique learning possibility of how drastically different it is to perceive surroundings from such a perspective. No surprise is to discover that level design was hugely inspired by the works of M. C. Escher — a man who found delight in drawing impossible, often looped architectural structures. 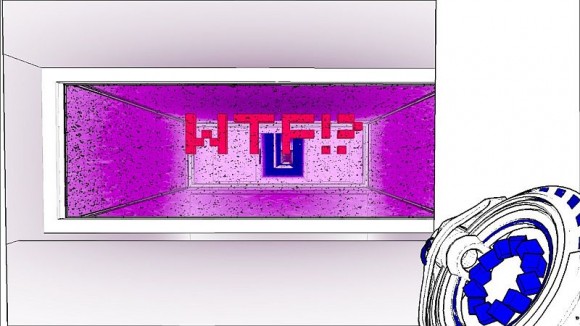 The only way to get the grasp of the layout is memorizing it. However that is not necessary because in any moment you can hit Esc key and return to a small black chamber that serves as a central hub from which by a single click you can transfer to any location you have already visited. Undoubtedly, it is a very helpful solution you will frequently use to comeback, with newly obtained knowledge, to puzzles you failed to beat previously. Nevertheless, the map employed in it is a bit too promiscuous and presented only in black and white what makes it difficult to distinguish between various locations.

The uniquely crated conundrums of Antichamber are its major advantage because they are significantly different from what other logic games, like for example Portal, offer. Due to the unconventional nature of this world the player have to think about its puzzles in unconventional ways. Problems presented here are not solved by applying logical-mathematical intelligence, but rather by creative, out of the box thinking and lots of experimenting. Well, there are some patterns here you will have to learn but you don’t do so by deducing the logic that lies behind them but
rather by messing around and observation. This game is more like unintuitive quantum physics than the Newtonian one we are used to.

The graphic design is just like the rest of the game — enigmatic and admirable simultaneously. It’s hard to believe that Antichamber uses the powerful Unreal Engine 3. Not because the game looks rough — it does not — but because it’s something completely different from what we are used to. Instead of focusing on lush, detailed environments rich in particle effects and high-resolution textures such engine can provide this game looks utterly simple.

Black lines on white background are predominant but the designer made also great use of other colors — both as aesthetical elements and integral parts of the puzzles. Artistic expression of the creator is perhaps best visible on the level called Gallery, where player can admire brightly variegated exhibits presenting items connected with typically human matters like clock or city and also miscellaneous 3D figures — a real feast for the eyes and the mind. However, from time to time the vividness of the screen can make you feel dizzy or literally give you a headache.

I’m not certain if this game has any plot. Narration does not exist; same with introduction and story development but there is a sort of climax — although culmination might be a more appropriate word since the game lacks typical sense of tension or conflict. Nonetheless, the absence of story does not mean that the game has nothing to tell you.

Antichamber is not only an adventure into the world of impossible physics but also a philosophical voyage. As its original title — „Hazard: The journey of Life” — suggests this game can be interpreted as a metaphor for a human living. The elements that link the gaming world and real life are the pictures, scattered around Antichamber’s rooms, which when clicked will provide you with a sentence that act both as a hint or reference to a puzzle and a maxim you can put to use in your life. It may sound a bit annoyingly educational but it’s rather subtle and this psychological aspect adds a lot of value to the game by giving you the feeling of intellectual development.

Antichamber is like Penrose continuous stairs — paradoxical in its very nature and extremely curious. It might look incomprehensible at first but after a little accustomization you will find out that it as a valuable experience. The game makes you feel smarter as you progress both by broadening your creativity and presenting you with aphorisms — yet, frequently introducing difficult challenges to not make you feel overly confident. Just like real life.