Rising Cities is not exactly new but it has grown big, it has more than twenty thousand likes on Facebook. What’s so interesting about this casual game from Bigpoint? Most likely the theme and the game’s style, after all construction and city building games aren’t so common.

In this metropolis genre title, the goal is to plan and build a modern city. In order to build a top city, you need to have workers and investors for work and cash power, then you can start your mega construction. Sounds exciting and motivating but things don’t look too shiny when you start your experience. The interface is very simple and the short guides introduce the game structure easily. On you take your first steps, you’ll realize how incomplete and surreal this flash game is, there’s basically no features at all. The menu has only seven buttons (merely a visual trick). Two of them are for in game options such as moving items; one is for the online real money; other allows you to see your in game currencies such as wood and bricks; another is your friends list… the two buttons left are the game’s features, build and buy/sell goods. A two buttons game, sounds fantastic, right? 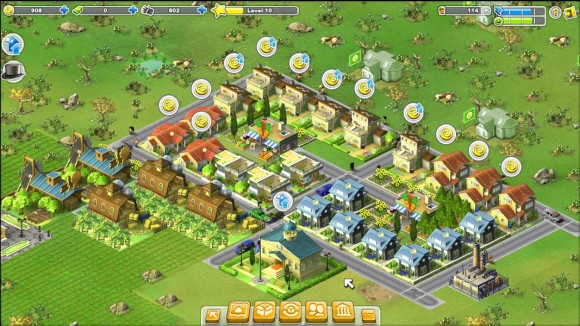 What else can you do? At least you can choose what to build and where, not that the space is vast but… it’s a start. The building system works by levels; higher levels proportionate more and better quality buildings. The game currencies are three: City Credits (cash), Metro Money (cash purchased with real money) and Production Points (from your workers). In order to rise up new constructions you need money and work power, as obvious. But you can’t simply build mindlessly, there’s two major worries to keep your city working properly – energy costs and the population’s satisfaction, you need to keep both bars high enough or your production and income will be drastically affected.

I perceived that the building realism is inconsistent, it mixes old technologies with brand new ones and the available buildings are very restrictive. You can have a coal factory but you can build an aeolian park too. When it comes to food, your citizens won’t have much of a choice – bread, fruit and pizza are basically every existent grocery in game. Your city will be, inevitably, a very tedious town too because there’s no entertainment buildings, I could find a soccer stadium and some lounge places under business but that’s all.

The game play is totally casual, clicking the same buttons over time is the game’s mission. Collect income, build, wait, start production, collect income, complete a task, build. It’s a very automated and flat system, ideal to play five minutes and let it be for the next day.