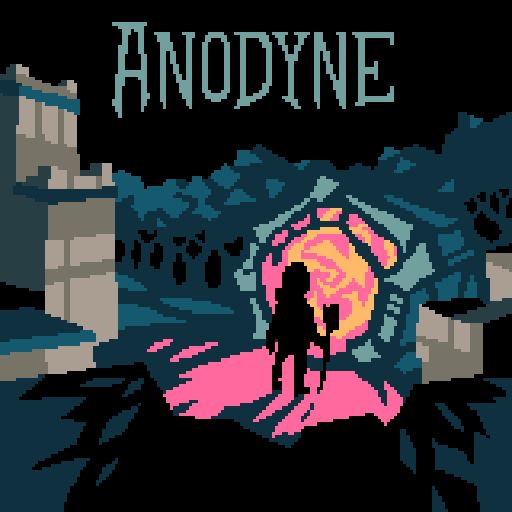 Anodyne tastes bittersweet — on the one hand it is a neat retro-stylized 2D action adventurer modeled on the perhaps most representative game of the genre — Legend of Zelda: Link’s Awakening — yet, adding a bit of its unique, grim touch; on the other, considering the game’s potential it is unfortunate it fails to deliver any innovations and with time gets more and more repetitive.

Whole game takes place inside the unconscious mind of the main protagonist — Young — and considering what we see there he clearly has some issues. The Land, as is called this twisted, bleak world is on the verge of perishing and it is Young’s goal to save it — certainly not an effortless task since to do so he will have to face his inner armed with a simple broom (a metaphor of cleaning this messed place?). Personally, such setting reminded me of Pan’s Labirynth — with a lost child residing inside his own imaginary world that reflects the harms of the real one, where wise sages oversee his journey and fairies aid by granting lives.

It impresses me greatly what designers managed to achieve with such humble means — despite the old fashioned 16-bit-like graphics the atmosphere here is no less haunting than in many other dreadful tales employing much more sophisticated technologies. In huge part that is due to sparing, yet stirring, music which uneasy tones intensify the overall feeling of anxiety. Anodyne may look similar to your childhood, gameboy memories but it is not appropriate for kids — honestly, it can give you chills.

Visuals are even better than the music — thanks to splendid artistic design The Land, has its unique, dark fantasy feeling making it look like a fairy-tale gone very bad or Hyrule’s grim future. No doubt, it is crafted very thoroughly, with attention to the detail but what I like most is that every part of it — whether it is ghastly forest, unsafe caves or enigmatic underwater land — feels very distinct from another thanks to usage of discrete palettes of colors and music — all that makes exploration itself enjoyable, though dreary, experience.

Such crooked world is obviously inhabited by crooked creatures, whose design is also praiseworthy. Most of them try to stop you although there are some peculiar NPCs worth mentioning like talking shrimp or older man called Rank who cuts bushes for living and looks confusingly similar to Link. You will also meet several bosses — beating them is not necessarily difficult but the encounters are memorable thanks to the appearances and ambiguous words they speak that often leave you thinking. Despite hideous looks they don’t seem to be utterly evil but rather sad, pitiful beings occupying sad world.

Anodyne’s story is a metaphorical, rich in symbolic tale dealing with difficult subjects concerning child’s fragile mind. Considering the amount of dialogues and complexity creators must have put a lot of workn’ into the plot; However, even though it does manage to deliver several disturbing, though-provoking scenes it gets too much out of focus at later parts of the game and can’t help to sound like ridiculous nonsense Fortunately, game lowers at times the amount of pretentiousness with doses of humor but still everyone who has difficulties bearing such stories should stay away from it.

If you played top-down action adventure games 20 years ago on your gameboy you will immediately feel at home but shouldn’t expect nothing more than standard game mechanics in Anodyne — which is a shame since independent projects are always a great occasion to present some creative gameplay design. Yet, Brooming opponents to death and surfing on piles of dust is still amusing as well as solving tricky puzzles; however these fun parts are annoyingly often separated by daunting searches for a mean of progress — whether it is a key, new ability or one of the fifty cards you must collect to finish the game — it gets even more discouraging when you are forced to fight the same opponents multiples times due to their revival each time protagonist enter the level.

Despite its downsides Anodyne fulfills its role as a tribute to old time classics favorably, successfully employing genre most most characteristic elements in a beautiful, imaginary landscape full of disturbing occurrences, so seldom seen in 16-bit environments; so if you long to recall childhood memories or feel in the mood to submerge into haunted world of kid’s twisted imagination do not hesitate to try Anodyne.