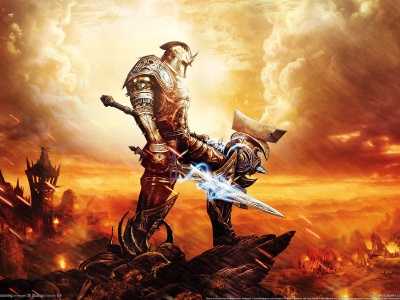 38 Studios founder, and beloved Baseball legend Curt Schilling recently took to twitter  to express his personal opinion regarding the Kingdoms of Amalur IP. “If someone were to buy Amalur, put team back on it, it’s a billion dollar franchise,” Schilling said. “2 years later and still no ones done what we we’re doing.”

The overly ambitious action RPG was deemed a failure after only selling 1.2 million copies. The game was critically well received, and did blend an addicting combat system alongside open-world exploration from most RPGs. But Gears of War creator Cliff Bleszinski disagreed with Schilling, “Curt you can’t just throw a bunch of bodies at it and attempt to make WoW and Skyrim. I wouldn’t try to pitch the world series.”

38 Studios and Big Huge Games filed for bankruptcy last year after failing to pay off astounding debts. All of the studio’s assets, including the unreleased MMO Copernicus, have all been claimed by Rhode Island. Kingdoms of Amalur is currently up for a telephone liquidation auction on December 11 alongside the rest of the studio’s many assets. There are about two dozen or so well known studios interested in purchasing the RPG. One of them might be EA, who published the original game through the EA Partners Program.