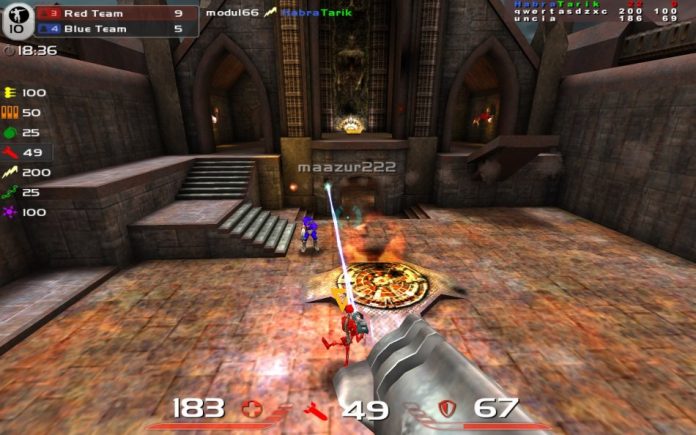 Id’s enigma of a shooter Quake Live has just been released onto Steam with some new features, most notably a loadout system which allows for a primary weapon and a secondary weapon to start out with. You may believe that “engima” is an odd way to describe Quake Live, based off of the quintessential competitive first person shooter Quake 3 Arena, but how Id has decided to handle Quake Live makes it puzzling and not much else.

Quake Live started as a completely free to play fps played through a browser four years ago. Released to understandable fanfare, people were excited for a change of pace from the military shooters that dominated the fps landscape at the time (and still do, to a lesser extent). The largest issue with Quake Live sustaining any playerbase was how nothing really changed from Quake 3 Arena to Quake Live, of course it could be argued that nothing at all needed to change and the original concept was good enough. Quake 3 Arena was a popular game, after all; played years after release before dying a slow deaththanks to the disappointing Quake 4 and Unreal Tournament 2004. That was exactly the point though, because everyone had played Quake 3 before there was no incentive to stick around, and the younger generation that may have never played a Quake game before in their lives didn’t convert to the browser shooter like Id may have hoped. Some time after release, Quake Live offered special incentives and maps through a subscription service and afterwards, much like Quake 3 Arena itself, nursed a very small population of players while competing with the other free arena shooter Warsow.

Id then decided to combat the lack of interest for their browser game by offering it on Steam alongside the controversial loadout system and matchmaking, to a lesser extent changing the announcer to someone much worse. The latter is primarily a personal gripe, the loadout system has spawned plenty of hate across the internet, at least from those that care about Quake Live with some seeing it as the flagship arena shooter giving in to typical fps tropes of today. It was obvious that Id couldn’t stay in the past with Quake Live, as it wasn’t working at all to keep people playing. Without players, their original plan for an advertising funded game imploded on itself. A loadout system may not have been the best way of getting people to play their game. Perhaps for those that have never played a Quake game in their lives, something that becomes more likely as the years go on, having starting weapons will make up for the lack of map knowledge and allow them to get some kills on much more experienced players. Quake 3 Arena has always been a game about map control, knowing how to navigate arenas and meeting power ups off timers like clockwork. Eliminate map control and putting power ups on literal timers that float above the screen and show up from across the map betrays the core concept of the arena shooter as a whole. All that’s left is knowing how to point a gun and shoot, which makes it just like every other FPS able to be played for free, and thus we will likely see the stagnation of Quake Live soon after release, much like we did four years ago.

Perhaps the world has moved on from the arena shooter after all, and Quake Live is the funeral.