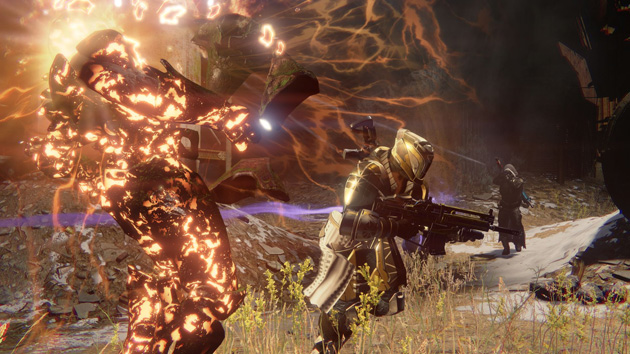 Movies and video game criticism to the general populous have many similarities, the two most glaring being accused of bias towards a title and being cautious towards new projects that don’t send copies of their movie or game out to reviewers for the initial scoring to drag fans into a movie theater. Relying on these movie or video game reviews used to be the go-to screening method before paying money to play or watch it, there weren’t many other alternatives that were legal after all. As times moves on however more and more companies are shying away from releasing pre-release copies, which rightfully worries critics about the overall quality of a product and no other title was more apparent of this than Destiny which released just last week.

Bungie had hype around their new game unlike any other company in recent memory for a new IP, something completely unfamiliar but had a common thread of being developed by the creators of Halo, the most celebrated console FPS of all time. That was enough for people to get excited for Destiny, having people so excited for a completely new property from a series that hit its peak 10 years ago, Halo 4 no doubt helped hit this point home by giving a disappointing experience. Everyone wanted a new Halo as Call of Duty is getting stale and the Halo of the past has turned into a joke of sorts…a potato sack wearing joke if the trailer for Halo 5 is considered. Bungie realized that nothing could stop the hype, and they wisely decided not to risk alienating potential buyers with the always possible mediocre review. Of course it got us, the ones that write about video games worried for the quality of Bungie’s new game, but the populous at large didn’t care. The silent majority has decided they wanted to purchase this game long before any review surfaced, and there was no reason to possibly clutter the tracks of Bungie’s hype train.

Of course when the game was released, Destiny wasn’t nearly the revolutionary shooter promised at E3 shows and Sony conferences in the years leading up to its released. It wasn’t bad by any stretch of the imagination, now Aliens: Colonial Marines? That’s a bad game that didn’t release any pre-release copies to the press, Destiny however was a competent shooter for the console world. The story was nothing special but the gameplay was there: exactly what people were looking from Bungie, but not the genre changing bombshell we were promised. If Destiny was released weeks before release to the press, the lukewarm reviews would surface and potentially deter people from purchasing their new title. When a game of Destiny’s magnitude is gearing up for release, there’s no point for any press hype when the marketing team did such a fantastic job of it in the first place.

This is a trend I see continuing from now on if the game is being developed by a studio like Bungie. Studios generally don’t get nearly as large as Bungie, or as revered but it’s enough to guarantee the hiding of a finished product from critics if a studio is AAA. Youtubers and bloggers are an entirely different story, they aren’t paid to be unbiased and fair, instead they’ll see the fact that a developer is giving them a game for free and will likely not tear down a free game gifted by a large publisher or developer. Partial media is the future of the game industry, and it could be a very bad thing when measuring out the merits of a new game.