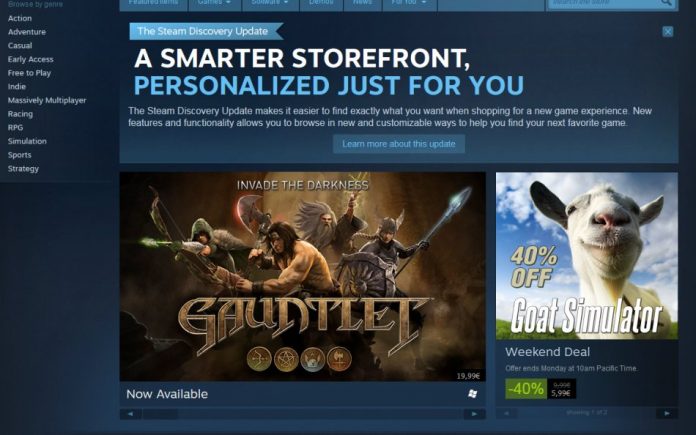 The Steam marketplace has changed, and will likely never look the same following the introduction of a personalized storefront, where the player themselves decides if a game is appealing to their tastes. Used in conjunction with a system of curators, it will instead favor newer games that fall in line with the genre that a user would prefer rather than whatever may be new or on sale. The curator system is fine in practice, it helps solidify Steam’s position as the de-facto PC gaming market and cuts out the middleman of finding reviews on web sites and offers them directly on a store page. The issue with this new storepage is the cluttered nature of the personalized page, which hides the daily deals near the bottom of the steam homepage.

It’s all unappealing to look at, and downright redundant at worst. As you continue scrolling down the page, Steam updates its front page with even more games that attempts to match your interests using recent playing time in a genre or style of game. It’s transformed the Steam front page into a cluttered mess, and can be annoying to navigate which is the worst possible thing for Valve to accomplish, especially with their stranglehold on the PC gaming marketplace. Granted it’s an entirely new system and will likely be cleaned up in future updates, so far the entire idea looks like a haphazard Tumblr-like, supplanting terrible opinions with terrible games. Add that in with the daily deals and the list of brand new releases being hidden near the bottom of the page and that’s a perfect storm of unappealing.

That being said, the curator feature is fun with joke accounts being made every day and recommending all of the bad games because why not? It’ll be fun until the internet beats the joke to death but there will be diamonds in the rough that persist. If you ignore the sponsored pages completely, the curator system helps bring a very fragmented Steam community together, much like groups when they first came out and have subsequently lost meaning as time went on. An active feature like curator can encourage users to rekindle the group hysteria from five to six years ago. Bringing the community together is never bad, and that’s exactly what curators do while telling questionable jokes about games new and old. That being said, hopefully Valve cleans up the mess of a storefront sometime soon as the notorious holiday sales are just around the corner.