Zee and the Alien Machine is the latest free online Flash Game by Zeebarf, the creator of the Reemus and Liam series. This game came totally unexpected, as the author is very busy working on a Reemus Game for PC, which is coming soon! I totally enjoyed playing this game from the Beginning to the End. The Graphics are quite notable and familiar, only Zeebarf makes this kind of animation, which is totally Awesome. Just like all of his other games, this one is a Point ‘n’ Click game, but with another style, and I like it. Zeebarf is very creative, and his unique games only attract more and more people! This game, like all of his other Adventure Games, is not easy, but logical and creative, and therefore I’ve written this Text Walkthrough :)

NOTE: This Walkthrough will literally walk you through the game. So, if you’re stuck, restart the game and follow this Walkthrough, or use the other guide for individual help :)

1. Walk right outside the Kitchen, were the Stereo is. Open the Right-side part of the Cupboard/Cabinet, the Stereo is placed on. Take the LEBERKLEISTER (Zee will walk to the Kitchen, and add it to his collection) 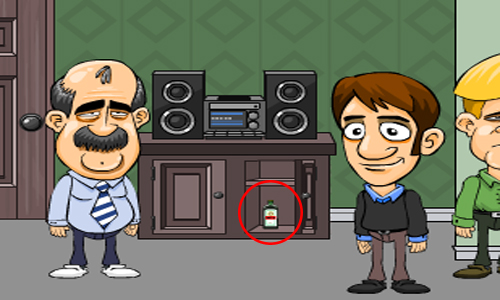 2. While you’re in the Kitchen, take 3 Cups from the Pile of Cups (on the Cupboard, left to the Oven), because that’s the limit to have at once. Use the First Cup on the Orange Juice Carton (White, Orange – left-side of Fridge), to get ORANGE JUICE. Open the Fridge, and take all the things that are possible to take: PUFF PASTRY, RAW GROUND PORK, MILK – once that’s done, use your Second Cup on the Bottles of Beer (Brown Bottles, Middle-Left in Fridge), to get BEER. Use your Third Cup on the Orange Juice, and then use the same cup you poured the Orange Juice in right now, on Vodka (Right-side of Fridge, the last one, White), to get VODKA ORANGE JUICE! 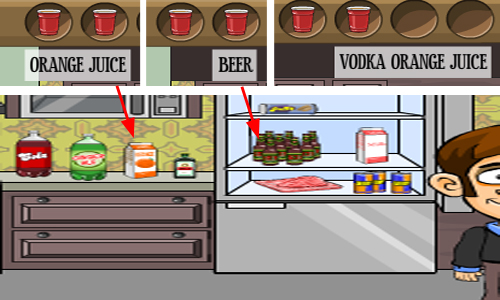 3. Find Barb (Woman with glasses, Red-Colore Outfit), and give her the Orange Juice. After you’re done talking to her, an Alarm will be set off inside Alex’s Room. Go back to the Kitchen, and Open the Top-Right Cupboard (above the sink). Take all the junk food there (it’s unnecessary, but you can give it to the Old Guy, Phil), in order to clean the Cupboard. After you’ve taken all of the junk food, you’ve probably found a BENT PAPERCLIP! Move in front of Alex’s Room (the Door, left-side of the Chips and other stuff, and Right-side of the Bathroom/Entrance). Use the Bent Paperclip to unlock the Door, and move inside!

4. Zee will automatically shut off the Alarm. Can you see the Top-Right part of the Alien Machine, the part that looks like a Sausage/Hot Dog – where electricity is conducted? Take the HOT DOG/SAUSAGE. Take the PATCHOULI OIL and NOISY METAL GEARS from the surface of the Dresser/Drawer, next to the door. Once you’ve taken those items, leave the Room! 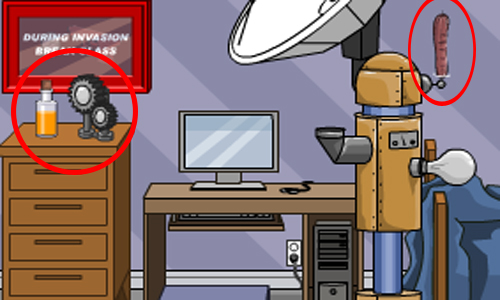 5. Whether you want to give the Old Guy, Phil, the junk food (4 in total, if you took ’em all), is up to you – its advantage is that it will get less messier in your inventory, and you’ll get an Achievement! And while you’re at it, give Phil (Old Guy with Moustache), the Vodka Orange Juice. Go to Lenny (The Rock Dude, T-shirt with Skull), and give him the Beer. And also, while you’re at it, give him the Noise Metal Gear, and move to the Kitchen! 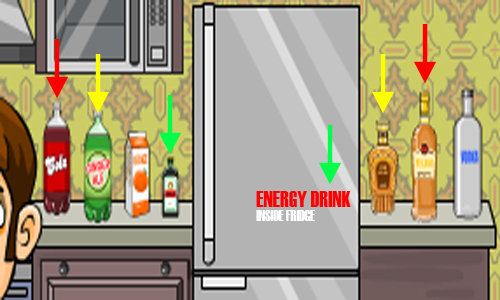 7. Find Richard (The Black Guy – no offense – Muscular), and give him Rum and Cola. The Alarm will be set on again. Get inside Alex’s room (in Middle of Chips and Bathroom). Click on his Computer Monitor, to shut off the alarm! Leave the room, Find Jim (the Sleepy Guy with Blonde Hair), and give him Rye and Ginger. Find Cyndi (Blondie Girl), and give her Leberkleister and Energy Drink!
If you give each of the guests, 3 portions of the same drink, you can get an Achievement!

8. Now to fulfill their wishes. Get inside Zee’s room (in Between the Stereo and the Chips, first door next to Kitchen). Take EMPTY COLOGNE BOTTLE on top of Drawer/Dresser, next to door. On Right-side of the picture of Cat, on top of Dresser/Drawer, there is a Dead plant. There is something reddish on Top of it. Take the DEFLATED BALLOON. Take the MP3 PLAYER/IPOD, Bottom-Right corner of the Monitor, on the desk. Leave the room. Go to the Bathroom (next to Entrance on Left-side of Living Room – your present room), and open the Mirror/Medicine Cabinet. Take the IPECAC SYRUP (it’s the only takeable item), and leave the room (or click on the Toilet, twice for Achievement)! Move to the Kitchen, and open the Cupboard, left-side of the Oven, the bottom one (open the left-side one). Take the BAKING TRAY! Also, take 3 Cups. Open the two Drawers, on right-side of the Oven, and take these items from inside: OVEN MITTS and TOWEL – and you’re ready to make your guests happy :) 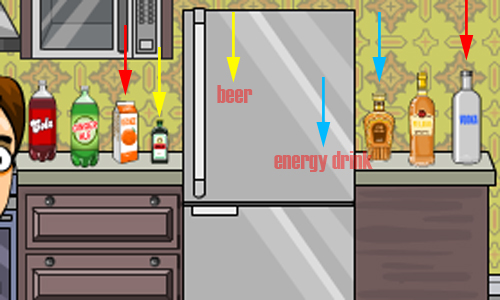 10. Go to Barb (Woman with glasses and all red), and give her Vodka Orange Juice. VOTE 1/6! Go to Lenny (The Rock Dude with T-shirt skull), and give him Beer Cocktail. VOTE 2/6! Go to Jim (the sleepy guy with blonde hair) and give him Rye and Energy Drink. VOTE 3/6!

11. Get inside Alex’s Room (Second door from Left to Right excluding the entrance), and hook up the MP3 Player, to the USB Cable, Bottom-Right corner of the Monitor, on the desk. Take MP3 PLAYER with DANCE MUSIC by taking the MP3 Player back. Leave the room, and go to the Stereo (huge Music Player, left to the Kitchen). Use the MP3 Player loaded with Dance Music on the Stereo, to play Dance Music. Talk to Cyndi (Dancing Blondie Girl). VOTE 4/6! 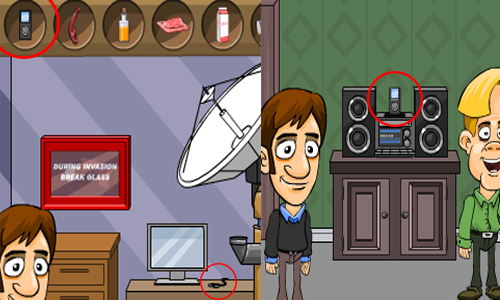 12. As Cyndi starts dancing, and Barb is from before, Richard will also start dancing, because we’ve automatically fulfilled his first part of his wish. Go to Richard (Black Muscular Guy). In your inventory, place the Palouchi Oil, left to the + mark (in the Combination Tool, Top-right corner). Place the Empty Cologne Bottle, right-side of the + sign (Right-side in the Combination Tool, Top-right corner), and press the + button, to combine the items, and get PACHOULI COLOGNE. Give the Pachouli Cologne to Richard (Black Muscular Guy). VOTE 5/6!

13. You’ll get a Text Message from Alex, read it. Go to Richard (Guy you gave Patchouli Cologne to, just seconds ago), and use Towel on him, to get PATCHOULI SOAKED TOWEL! Move inside Alex’s room, and use the Patchouli Soaked Towel on the Alien Machine. Leave the room! Go to the Kitchen. In your Combination Tool (Top-Right corner), combine Puff Pastry and Baking Tray, to get PASTRY TRAY. Open the Over (Middle of Kitchen, left for Fridge), and place the Pastry Tray in there. Close the Oven, and click on the Buttons at the Top of Oven (just click somewhere, on the most Top-part of the Oven). Then, open the Oven, and use Oven Mitts on the Baked Pastry, to get COOKED PASTRY. Combine the Cooked Pastry, and the Hot Dog, to get PIG IN A BLANKET. Go to Phil (Old Guy), and give him the Cooked Pastry with Hot Dog/Sausage, or Pig in a Blanket as it’s called. VOTE 6/6! 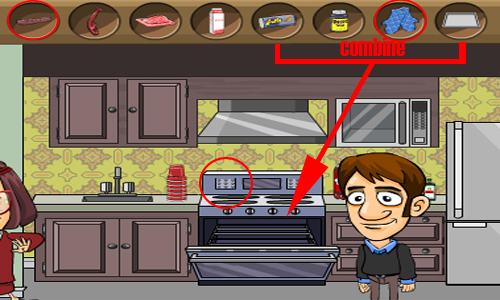 14. Alex will text message again. Combine the Deflated Balloon and the Raw Ground Meat, to get BALLOON HOT DOG! Move inside Alex’s room. Use Balloon Hot Dog on Alien Machine. Click on the LockBox, under the Computer Desk, to open it, after reading a couple of messages sent by Alex! Take the HAMMER. Use the Hammer on the Red Emergency Kit, on the wall, to smash open it. Take the ROTTEN EGG and SQUIRT GUN. Leave the room! On the Right-side of Alex’s Door, there are sweets in bowls. Click on the Middle Small Red Bowl, to get CHOCOLATE DROP. Combine Milk and Chocolate Drop, to get CHOCOLATE MILK. Combine Chocolate Milk and Squirt Gun, to get CHOCOLATE MILK SQUIRT GUN. Move to the Kitchen, and use Rotten Egg on Microwave (Just above the Beverages, left-side of the Fridge)!

15. Wait for the Egg to explode. Go and check all the guests. Ask the ones, whose faces aren’t affected by the smell (they do think the smell is bad). There will always be 2 unaffected, and one of them is the Alien. After asking both of them, give the Ipecac Syrup to one of them ,and they’ll run to the bathroom. Goto Alex’s room! You see the Poster, on the wall of where the Bed is, saying “I WANT TO BELIEVE”. It has 2 Nails on each Top corner. Use the Hammer, on the Top-Left corner Loose Nail. Click on the Peephole, and see if it’s the Alien or not. If it isn’t, go back and try the other guest. If it IS, then, leave the Room, and enter the Bathroom (left-side of Alex’s room)! 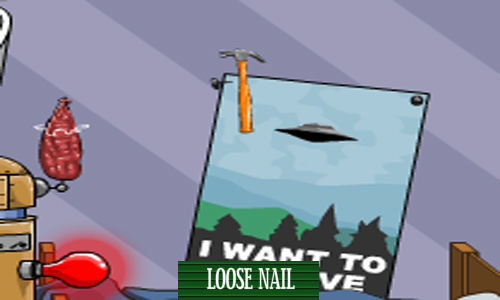 Now it’s up to YOU, what you want to do. Follow one of the following:

All of these 3 Endings will give you an Achievement. If you want them all, then choose to Replay Ending, after you’re done. For the Last achievement, you need to choose the Replay Ending with a Different Alien from the Main Menu, and then kill the ones you haven’t killed yet!

– Drinks for each Guest

WOW. These walkthroughs took almost 3 Hours to write, lol :P
But, with all the Trouble I went through getting this as simple as possible and making screenshots, it took me 4-5 Hours in total O_O
Hope it’s helpful for non-video walkthrough viewers :)