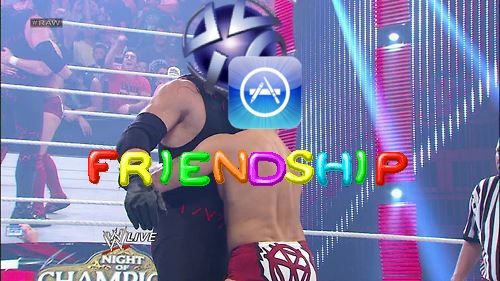 I like playing games on my PS3, Vita, and 3DS. I also like playing games on my iPhone and Nook Tablet. Yet I seem to be in the minority in this aspect. There seems to be a schism in gaming. On one side there are consoles and handhelds, on the other, mobile devices like smartphones and tablets. And this schism isn’t just between gamers; it extends all the way to the top with developers and important executives in companies on both sides. It almost seems like the two sides are hell bent on destroying the other.

I have admittedly lost track of the amount of people in the mobile game industry crying from the rooftops that console gaming is dying, or that the new generation of consoles will be the last one, or any variety of statements that predict doom and gloom for the console and handheld market and bright and shiny days for the mobile market. On the other hand you have people like Satoru Iwata, among others, on the console and handheld side firing volleys back at the mobile gaming side.

And then there are the gamers on both sides who for some reason loath the games on the other side. Those on the console side look down at mobile games for being too cheap, or too simple, or disliking the lack of tactile feedback in the controls. Those on the mobile side just don’t seem to think the prices of console and handheld games can be justified when they can get literally dozens of games for the price of a single full priced console game. Not to mention touch controls are easier to wrap one’s head around than a controller or a handheld. Really when you think about it the argument between the gamers on the two sides is just another battlefield in the mind numbing “war” between “hardcore” and “casual” gamers (which is an entirely different topic to tackle at a later time).

The video game industry is a multi-billion dollar industry, surely the two industries can coexist peacefully. And there are some examples that they can coexist. Look at the Ouya. It is a console, a tried and true console with a modern twin stick, four shoulder button controller, albeit with a touchpad in the center of it (which is not too dissimilar to the DuelShock 4). And yet the console itself runs on Android, a mobile OS. It has the cheaply priced games of mobile gaming and the tactile controls of console gaming. One could say it is the best of both worlds.

And about the games, more specifically the mobile games, what exactly even is a “mobile game”? I have to ask this, because there is a lot of crossover recently between the two industries’ games. You have games that were created for consoles and handhelds like Grand Theft Auto III and Vice City, Phoenix Wright, Ghost Trick, The World Ends With You, The Walking Dead, and even XCOM: Enemy Unknown, to name a small amount, appearing on mobile devices, and almost entirely intact from their console and handheld versions, just with touch controls. You also have games created for mobile devices like Angry Birds, Fruit Ninja, Jetpack Joyride, and Cut the Rope being ported to consoles and handhelds.

At this point it just seems to me like games are games and it doesn’t matter what device they are on. If someone is having fun playing a game, it really shouldn’t be a big deal if that game is being played on a device with buttons or not. Instead everyone needs to just remember to keep calm and game on.