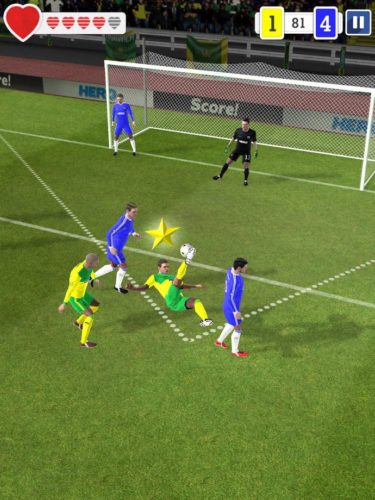 Mobile games are taking over the world. Renowned video game developers are reporting more revenue on mobile than traditional consoles (like Square Enix, for example) and the gamers themselves start spending more and more time in front of their iPhones or tablets enjoying the quick and fun titles. Score! Hero is a recently released game that proves the world why we’re all starting to switch to mobile gaming.

Putting you in the shoes of a new, recently signed football player that wants to take over the world, the game is fast paced, intense and insanely addictive. Instead of playing entire football matches, you only play the important moments where you have to score to drive your team forward. No dead times, no frustration from a late-minute equalizer, just non stop action and some strategy.

You control the trajectory of the ball by swiping your finger on the screen: you have multiple options most of the time and passing the ball to a different player, a new highlight, will change the game completely. And this is the best part about Score! Hero: it’s always a challenge, it’s always new, it’s complex and complete. It’s really amazing, actually: you can try to turn your own player into a goal scoring machine or you can simply be part of the team and enjoy the wins, no matter who scores. It’s your choice usually and no matter what you choose, you will have a lot of fun!

The AI and overall behavior of all players on the field is really impressive and natural: you’d think that for a game which follows a Candy Crush Saga mission approach, you won’t have that much depth, but it’s not true: I always find myself in awe of the realism the title throws at me. And that’s always a great thing!

Visually, Score! Hero is impressive and it clearly delivers some of the best graphics on mobile. I honestly believe that we can say its graphics are on par with last generation console graphics, and they look simply amazing. Of course, you need a strong device to handle it flawlessly, and for that we recommend the new iPhone available at iiNet. It’s really worth it, trust me!

Being a free game, it does have some limitations: Score! Hero uses an energy system that allows you to replay missions 20 times (but if you successfully complete one, no matter how many stars you get, you lose no energy). You can also use in-game currency to rewind a phase and replay it so that you don’t lose energy or your progress when you restart the mission, and the in-game currency costs money too. You can also get that by watching video ads, which is something I ended up doing way more often that I’d like to admit, but overall I have no complaint. It’s not that type of a game that tries to force you to spend money in order to win. It’s not “pay to win” it’s “pay to get go through the game faster” – which, in the end, you are not forced to do.

In concussion, Score! Hero is a beautiful game. I wasn’t expecting it, I didn’t even know that it was coming out, but I am happy I decided to give it a try and I can only wholeheartedly recommend it to everyone looking for a high quality iOS game. It’s basically New Star Soccer evolved and improved: click here to get it for free on the App Store.