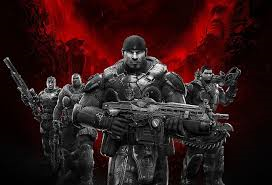 The summer drought has drawn to a close, as Gear of War: Ultimate Edition leads the charge in the UK All Formats Chart.

Five new releases find themselves in the Top 10 this week, with the Xbox One remastering of the 2006 original Gears (complete with access to the Gears 4 beta) out on top.

Just behind it is the PS4’s survival horror Until Dawn, which beats the first of this years’ toy/game hybrids Disney Infinity 3.0, which debuts in third place. Completing a brand-new Top 4 this week is American football sim Madden NFL 16.

With the new games abound, last weeks’ chart-topper LEGO Jurassic Park tumbles to fifth. Also taking a drop of four places is Grand Theft Auto V, which is down to sixth.

The final new entry in the Top 10 this week is another remastering for the current crop of consoles: Dishonoured: Definitive Edition, which comes in at seventh.

Minecraft manages to keep two places in the Top 10 this week, with the PlayStation Edition down to eighth, and the Xbox Edition rounding off the Top 10.

Batman: Arkham Knight is the other game to appear in the Top 10 this week, down six places to ninth.

Elsewhere in the charts there is one more new entry, with Bandai Namco’s One Piece: Pirate Warriors 3 entering the charts in 27th.

Next week will surely see Metal Gear Solid V: The Phantom Pain enter the charts at the top, but it will be interesting to see the performance of Mad Max, which will also be vying for a decent position in the chart.