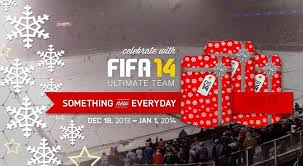 FIFA 14 has been crowned the UK’s Christmas number one game for 2013.

Last week Call of Duty: Ghosts had been leading the charge for the coveted spot, however figures released by Chart Track showed an 18% rise in sales this week for EA’s football simulator saw it overtake Activision’s shooter and beat it by a respectable 17,000 units.

Call of Duty has been a dominant force in the UK Christmas Charts since the release of Call of Duty 4: Modern Warfare back in 2007. The series has seen its games hit the top spot come Christmas in 2007, 2009, 2010 and last year with Black Ops 2 getting the crown. FIFA’s last Christmas number one came in 2008 with FIFA 09, when it beat Call of Duty: World at War.

What EA can also be proud of is that since the charts began 28 years ago, they have claimed the most Xmas number ones with 14 (eight of which being FIFA).

Elsewhere in the charts, Assassin’s Creed IV: Black Flag climbs up to third thanks to retailer promotions. Battlefield 4 is able to hold on to fourth spot.

LEGO Marvel Super Heroes is able to hold off record-breaker Grand Theft Auto V, which come in fifth and sixth, respectively, with only 400 units separating the two games.

Just Dance 2014 comes in at seventh, whilst Need for Speed: Rivals drops one place to eighth.

PS4 exclusive Killzone: Shadow Fall is still being helped by its PS4 hardware bundle as it comes in ninth, whilst Minecraft: Xbox 360 Edition returns to the top 10, and knocks Gran Turismo 6 down to 11th this week.

You can see the full Xmas top 40 here.

What are your thoughts on a FIFA Christmas this year? What game do you think will be leading us into the New Year? I would just like to raise my glass (well, can at the moment) to EA on a well fought battle this year.