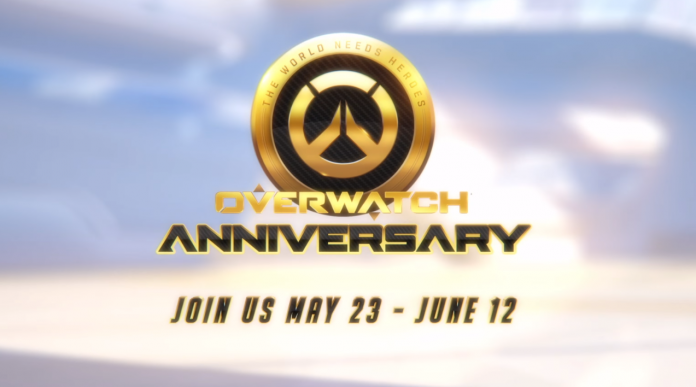 Welcome Heroes! Next Wednesday it will officially have been a year since Overwatch took the world by storm with its MOBA fused first-person shooter gameplay. To celebrate, Blizzard put together a heartfelt video comprised of in-game cinematics, eSports stuff, and a bunch of fan work. Take a trip back in time to see what the game has accomplished in its first year!

At around the 4:05 mark of the video, you’ll catch a glimpse of the infamous Lowcost Cosplay guy with his Symmetra cosplay! If it’s one thing that Blizzard has always been good at, it’s building their relationship with the communities. This video is essentially just one big thank you to all the fans who have helped shaped what Overwatch is today.

And now, you can be a part of the celebration too! Blizzard has announced that from May 23rd to June 12th, there will be a special anniversary celebration event! They haven’t really revealed any details yet, but you can be sure that there’s going to be special time-limted game modes, skins, and more. According to an Xbox One Store listing, it seems like everyone is going to get 50 (!) lootboxes for free! This hasn’t been confirmed yet though, so don’t get too excited!

If you still haven’t tried Overwatch yet, you’re in luck. From May 26th to the 29th, Overwatch will be free to play on PC, Playstation 4, and Xbox One. If you’re on PC you’ll need to download the Blizzard app and create an account if you don’t have one already to play. For console players, you’ll need to grab the Overwatch Free Weekend download from your respective stores. That’s it – simply log in and play! Be sure to bring a couple friends with you, because Overwatch is a game much more enjoyable when you’ve got buddies to team up with. To sweeten the deal, all of your progress will carry over should you decide to purchase the full game. Because of this, we’re expecting the game to go on sale during the anniversary period, so keep a lookout!