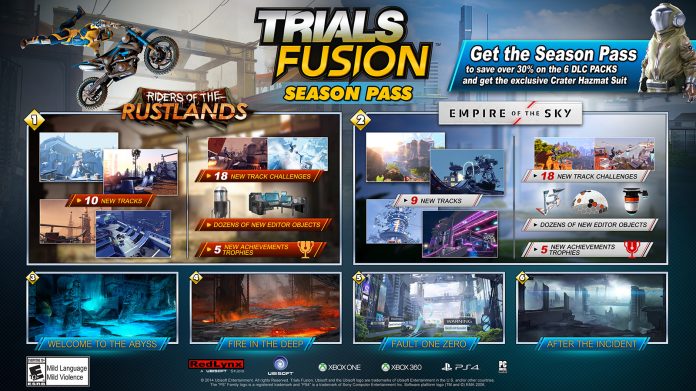 The first piece of paid-for DLC for Trials Fusion will be released this month, Ubisoft has announced.

In stark contrast to the pristine, futuristic city that Trials Fusion is based in, Riders will see us venture into the abandoned industrial wasteland outside of the city.

As with the main game, the Trials tracks will include three challenges per track, some of which Ubisoft teased us with by saying they include infiltrating an Outsiders base and competing in a game show against penguins. There will also be more secret squirrels to discover.

To round off the DLC there will be a number of additions to the Track Editor, including a steel pipe set, a wooden ramp set and computer mainframes to toy around with. There will also be five new achievements/trophies to work for.

Also announced on Ubi Blog was the second piece of DLC, due for release later in summer, called Empire of the Sky. This will see players riding on islands that are floating above the planet in Trials Fusion, and adding nine more tracks.

RedLynx will also release updates periodically which will be free to download, such as the recent Tournaments update.

What are your thoughts of the content in these packs? What do you want added to Trials Fusion (multiplayer excepted)?