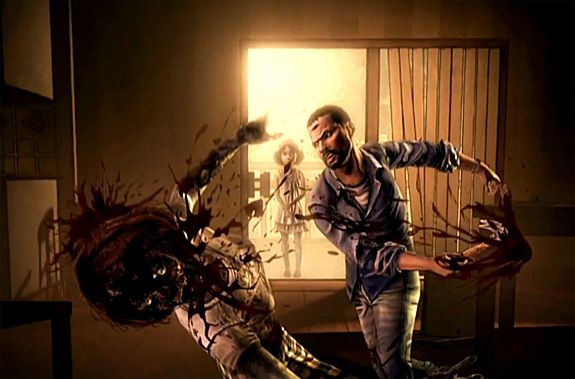 Those of you who have experienced the series that Tell-Tale Games has cultivated in the last few months know the pain associated with patiently waiting for the next episode to hit the online market. I have compounded a convenient list detailing the 5 Things that Tell-Tale should do in the next installment to make eager fans like me love the series even more.

We can all admit that the doll that we were introduced to in the first installment of the series has grown on us as we have played the 3 to 4 hours of story available at this time. If the poor child were to be taken away it would leave a gaping hole in my heart mainly due to the fact that she has been portrayed in the narrative as one of the few bastions of hope and innocence left in the broken world. If she were to suddenly disappear from the story through death (or other means…), I would personally consider leaving the series all together. So, if Tell-Tale knows what the heck they are planning to do, they will leave the poor girl alone!

Everyone likes killing zombies. Everyone.

What Tell-Tale should do in the next segment of the story is give players access to a larger arsenal of weapons. If it was cleverly pieced into the story and, in addition, allowed players access to an expanded arsenal for even one level, I would still be ecstatic: such an action may add an extra element of gameplay; however, it would detract a bit from the story especially in the way that the narrative has played out until this point. Ya know… desolation, isolation, and a number of other negatively-driven “-tion’s” that it could make your head spin. All I’m asking for is one more reason to have myself run to Steam within the next month or so.

We have seen them all: Fast zombies, slow zombies, lumbering goons and leaping monsters alike (Left 4 Dead anyone?) however Tell-Tale should broaden the scope that their enemy types have covered and include a few more bad guys for players to go to town on!

This would make for an experience bridled with on-the-edge enjoyment for any zombie fan the world over. If I had the opportunity to go through a quick-time-event with a creepy looking flesh-eater that could detonate at any moment, I would mash my mouse and keyboard with wistful brilliance to deny that death. All in all, it would make for a hint of unpredictability when considering the static cast of enemy types that have graced the scene so far.

Oh wait… that’s a given.

If we have learned anything from the previous two episodes it’s that you should not grow too close to anyone who has the misfortune of joining your group. I could write a whole post about the incredible reluctance I displayed when deciding to save [insert character name here] from [insert disastrous event] only to find out that I had to choose to save [so and so] or [so and so] in the heat of the moment. Although I may have hesitated, these events are one of the main reasons I fell in love with the series. Due mostly in part to the impact it had on my psyche when I conversed with a character that may not live to see the next day.

Difficult stuff if you ask me.

1.  Don’t Change the Feed on a Winning Horse

What Tell-Tale did best in the first two installments of the series is bring players into the desolate, broken world which these characters live in and, in the same vain of the comics, allow for the emotional plight of the narrative to take a stroll to the forefront of the gamer’s mind. In doing so, it truly brought players like myself closer to the world that seemed so lost – hence the zombie apocalypse:)

So, if Tell-Tale Games continues to ride this horse the same way they have been, there will be no worries on my end!