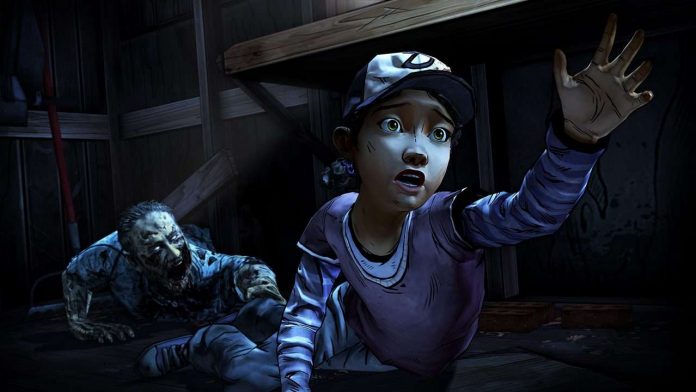 Clementine has lost everyone she loved during Season 1 – her parents, her friends and her mentor, Lee. Surviving has become an impossible mission for those close to Clementine and at the start of Season 2 things don’t get any better. This time Clem gets separated from her only remaining companion, Christa. A group of bandits attack and the young girl is forced to run away in order to save her own life. Alone and vulnerable, the girls tries to find anything she can to survive, however all she finds is a lost dog, Sam. The animal seems quite friendly and a possible companion but eventually hunger takes the best of him. Clementine manages to find a can of beans and even if she decides to share the food with Sam, he will ferociously attack her.

After this episode, the girls is severely wounded and she wouldn’t last long without medical supplies and that’s when two brave guys show up and save her from walkers. A bit forced I would say but Hollywood movies also use this drama style. Anyway, the new group thinks Clem has been bitten by a walker and they don’t want to risk taking her in. The dog attack story didn’t convince them, not even a little. But Clem knew she had to take care of her wound, else she would really turn… the infection would spread and she would die soon enough. That’s when she escapes through a breach in the cellar and infiltrates the main cabin to get medical supplies. While stitching up her wound back in the cellar, a walker hears her pain screams. A fight is inevitable and the little girl uses everything around her to kill the walker. Finally, the group arrives and realizes what’s going on, it was in fact a dog’s bite and Clem is not just a girl, she can perfectly take care of herself… and she’s also capable of stealing. Regardless of all her actions, some of the members apology and invite her to stay, while others remain cautious and hostile. Did Clementine find a new home? Is this new cabin in the woods suitable for Clementine?

The girl decides to stay, at least for a while, and she also decides to take part of the group activities in the next morning, she goes fishing with Pete and Nick. But things went down the hill. Instead of fishes, the group found several fresh corpses and decided to investigate what happened there. They realized that humans were behind the massacre since most victims were shot down in the head. As soon as Clem finds a survivor, a horde of walkers emerges from the woods and she can only save one member. This decision will surely carry a lot of weight in the next episode and she’ll possibly be blamed for not saving both, when she supposedly could. When she decides to save Nick, he asks her why didn’t she save Pete instead. The young girl already has a bad reputation amongst some of the members and after this event, things will only get worse. Will there be any home left for Clementine in episode 2? Also, there’s this mysterious man, Carver, who used to be part of the cabin’s group before they split up. Is he a murderer, an assassin without any kind of remorse? If he’s behind the massacre at the shores then he’s surely a major treat for the whole group. He might as well kill them all before the walkers have a chance to.