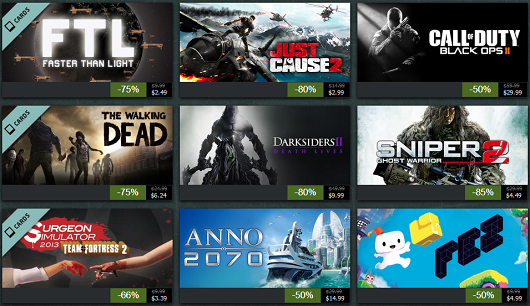 Everyone loves the Steam Summer Getaway Sale, right? It’s so awesome to spend your money on a bunch of games so that you can be sure that you can’t spend your free time doing anything else for the next year. This is a sale that all Steam gamers look forward to the entire year. Day 2 of the sale brings some great must own titles to your Steam library for very affordable prices.

Each set of “daily” deals last for 48 hours, which means there’s still around 24 hours left to snag yesterday’s deals. Those bargains include Bioshock Infinite for $30, Left 4 Dead 2 for $5, as well as others. There are also Flash Sales running during all of this that allow great deals that only last a few hours, so be sure to grab those while you can. I hope everyone enjoys stimulating the economy and giving Valve their support. They did a really great job of putting games on sale that even people without gaming computers can enjoy as well. With steals like these, hopefully our wallets are prepared to lose some weight this summer.