Valve today announced that Steam will be getting its own virtual trading card system.

Half of these cards will be earned by playing games on Steam, with participating games made up of CSGO, Dota 2, TF2, Portal 2, Half Life 2 and Don’t Starve. These cards generally feature characters from the game, such as TF2’s Heavy or Half Life’s Gordon Freeman. The other half may only be obtained by trading with others, or alternatively buying them from the Steam Marketplace, which is already showing some of the virtual cards going for as much as 90 dollars.

Once a full set of cards has been acquired, players may craft them together, unlocking a new badge and a random bonus. These prizes include emoticons that can be used in chat, a customisable profile background, a coupon or discount for games on Steam or 100 XP.

This XP goes towards a player’s new Steam level, which may be increased via obtaining more badges. In addition, badges that have been accrued over the past few years will now retroactively give XP. Higher Steam levels will allow players to add more friends and customise their profile. 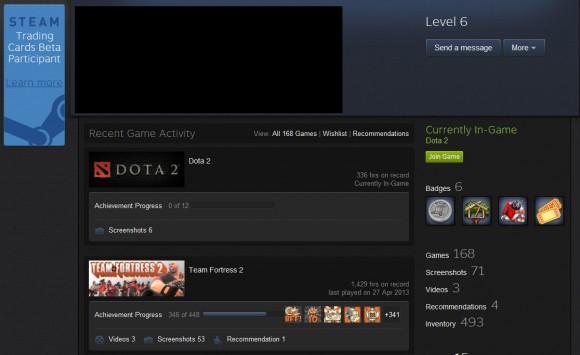 The profile has also received a major overhaul and now has a lot more in common with the Steam Mobile variant, with recent games played and achievements unlocked featuring rather prominently.