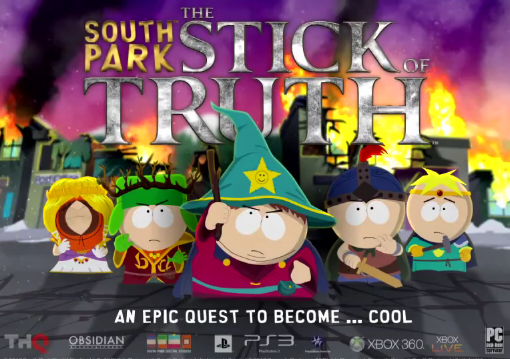 Ubisoft has confirmed that the long awaited Obsidian Entertainment developed game, South Park: The Stick of Truth, will launch on December 10 for Xbox 360, PS3, and PC. A Pre-order bonus has also been revealed by Ubisoft. This pre-order bonus is called the Ultimate Fellowship Pack and will include four “exclusive costumes” that feature special abilities.

These four costumes are as follows: The Necromancer Sorcerer outfit, which will increase fire damage. The Rogue Assassin outfit which will yield extra gold. The Ranger Elf outfit, which will allow players to deal extra damage with weapons. And finally the Holy Defender, which will boost players’ defense statistics.

A premium, $80 special edition version of South Park: The Stick of Truth has also been revealed. This special bundle will include the full game, a six-inch Grand Wizard Kidrobot Cartman Figure, a Kingdom of South Park Map, and the Ultimate Fellowship Pack as well.

South Park: The Stick of Truth had been delayed several times. The original launch was planned for March 2013 until the game got detailed yet again. The title was also part of THQ’s bankruptcy auction back in January. As a game originally published by the now defunct THQ, it was bought out by Ubisoft for around $3.2 million.

The game has also been overseen by the show’s original two creators, Trey Parker and Matt Stone. The game will feature the same 2D animations, characters, voice-actors, setting, etc, that can all be found in the actual show. The title will be a RPG game as well.