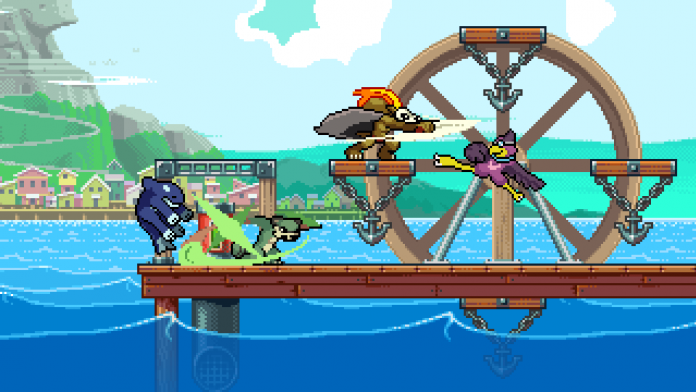 If you’re a gamer then at some point you’ve probably played Nintendo’s mascot fighter Super Smash Bros. If you haven’t, well, first of all you’re missing out! Secondly it’s a fast and frantic platform fighter that is easily approachable but has a ton of depth to it. It’s a lot of fun and you should check it out the latest version, Super Smash Bros. for Wii U/3DS.

Something interesting happened to the second iteration of Smash. With an accidental plethora of advanced techniques and tricks, Super Smash Bros. Melee became a tournament-styled hit. There were a lot of players who played the game competitively because it was so complex and the skill ceiling was so high. When the sequels came out, the competitive aspect was a bit toned down, but still there.

Dan Fornace, a big Smash fan and indie developer set out to create his own version of Smash. The first game he released was a fan game “demake” of Smash, simply titled Super Smash Land. It was essentially a “what if?” game if Smash Bros. was on the original Gameboy. It was fun and had a surprising amount of depth, but most importantly it served as the framework for his next big project: Rivals of Aether.

Rivals of Aether entered early access in 2016 and was met with critical acclaim from Smash fans. It was still a platform fighter just like Super Smash Land before it, but this time around it featured completely new and original characters in an all new world. With a soundtrack composed by chiptune expert flashygoodness and advanced techniques lifted straight from Super Smash Bros. Melee, the game was gearing up to be a big hit.

As a big Smash fan I instantly fell in love with Rivals of Aether. It’s fast, fluid, and extremely fun. The character are charming and each have their own unique playstyles. If you’re also a Smash fan or if you just love fighting games I highly recommend checking out this game! Rivals of Aether has left early access a couple weeks ago and has officially launched. You can check it out on Steam and Xbox One.