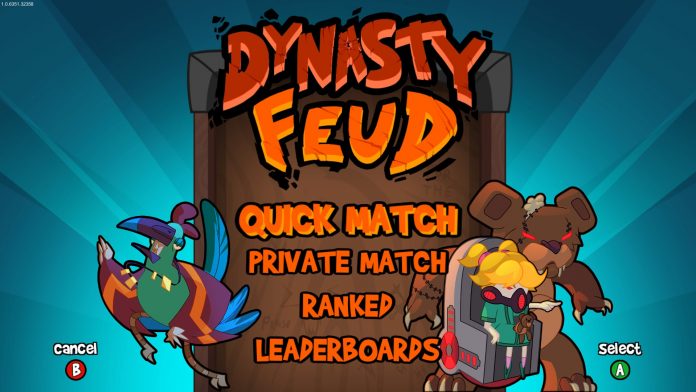 Dynasty Feud sports local and online versus modes for up to four players, but no single-player modes. There is training, but there’s no single-player campaign or anything like that. We thought it’d be really interesting if each dynasty had a backstory as to why they were fighting the other dynasties, and because of the expressive character design there’s a lot of room for some crazy stuff. Who knows, this might come in a future update! 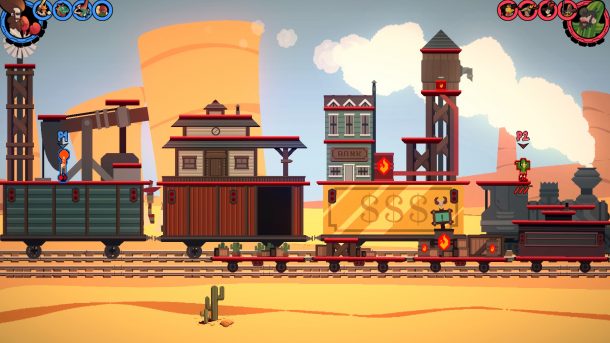 Right off the bat you’ll notice Dynasty Feud is rocking a very cartoony stylized look. The character designs look great and they give a lot of flavor to the cast. We kind of wished though that the in-game battle sprites retained the personality. During battle, the dynasty characters you play as are shrunken down to tiny pixely sprites. Thankfully though each player has their own color and their current character gains a matching colored border, so you should have less problems losing your character in the middle of a fight.

Before a match, all players have to pick a Warden Spirit of a unique dynasty. Each dynasty comes with five playable characters who all have their own unique playstyles. The amount of playable characters in this game is crazy! The Warden Spirit’s also have a unique super move for each of the dynasties as well. When a match starts, you’ll be able to float around the screen as your warden spirit before your first character randomly spawns in. Then, the chaos ensues! 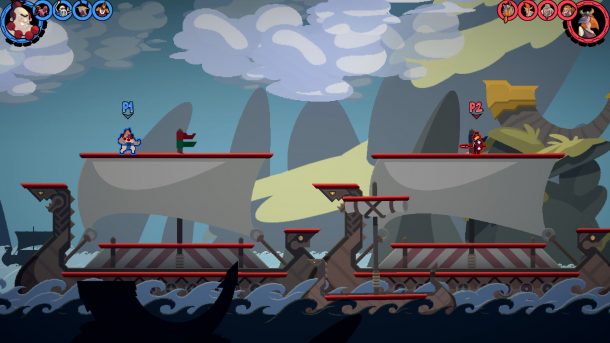 As we mentioned, each character has their own way of dishing out damage. Dynasty Feud adopts a control scheme again similar to Super Smash Bros. – you have a jump, normal attack, secondary attack, and a dedicated defensive maneuver. Characters have different weapons, some can double jump or wall jump, some can block with shields, some can dodge roll, and so forth. Mastering each character in your chosen dynasty is essential to victory, and is a big part of the fun.

Matches in Dynasty Feud are lightning fast, and that’s because each one of your characters can only get hit once, with some exceptions. Once you lose a character, they’re gone for the rest of the match and you’ll spawn in with your next character left in the dynasty. There’s a short timer before each respawn, and you can use this time to annoy players with your warden spirit ala Bomberman! This can lead to some hilarious moments. 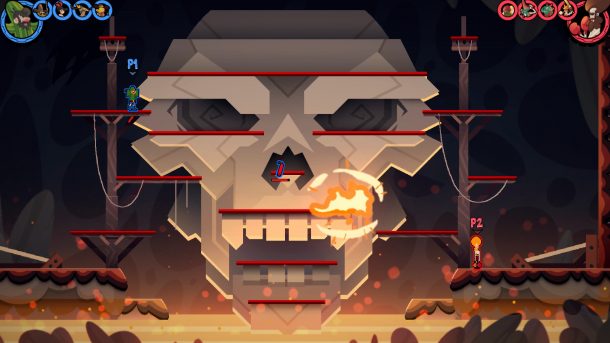 There is some depth to the game as well, but this is where some design problems arise. There has to be some limiting mechanic so players just can’t spam their way to victory, and this is where “cancels” come in. If you’re a fighting game fan you probably already know where this is going. When two attacks of equal strength collide at the same time, they will cancel each other. What exactly happens is determined by the types of attacks used. For example, two melee characters clashing will result in both of them being stunned. If two bullets collide, both will be destroyed. If two thrown weapons collide, they will drop and must be retrieved. It’s interesting and gives a lot of competitive skill to the game, but it becomes a bit rough with new players.

This is the duality of the tiny pixel characters. At first glance it’s hard to tell what a character is capable of because the in-game sprites are so small. Does this character have armor? Do they have projectiles or thrown weapons? Since in most instances you will only have a split second to react to a bullet or attack, sometimes learning new characters will feel like trial and error. It’s a minor gripe because the game overall feels like a fast-paced party game, and eventually players will catch on and learn all the characters even though there’s a daunting amount of them. 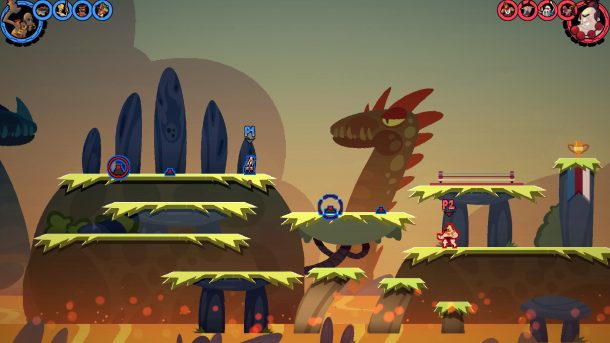 If you couldn’t tell from our intro, Dynasty Feud has a lot of character and personality to it. We’ve went over the art style, but the sound design is spot-on too. Each character has their own unique grunts and cries as they jump and roll around in battle. The Warden Spirits are perhaps the biggest example of this. Every time you summon them for your super attack, they’ll show up on screen with dramatic flair. Nekoyama Shi will let out a long meow and throw a yarn ball across the screen to squish your foes. It’s always funny to watch each special get unleashed – maybe not so much if you’re on the receiving end.

Overall Dynasty Feud is a fun and frantic platform fighter that’s perfect for short couch sessions when you’ve got buddies over. For those wanting a little more, the combat has some nuances that will take some skill to master.