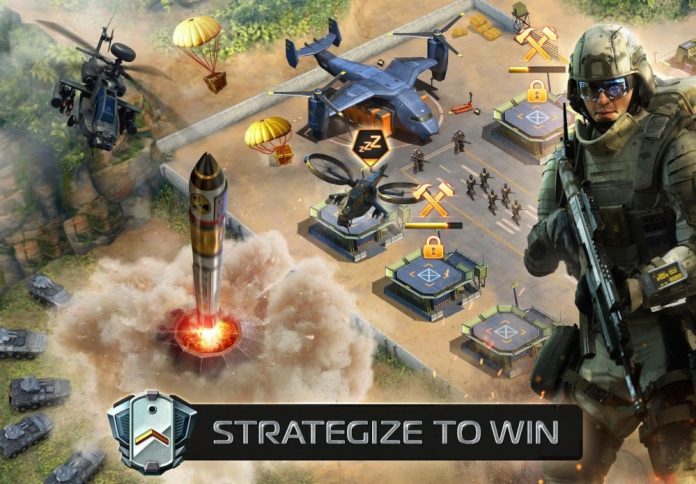 Soldiers Inc: Mobile Warfare is an MMO Strategy game with a whole lot of base building and the usual freemium mechanism that we have now come to expect from most mobile games. It definitely has a few things going for it, but are they enough to set it apart from a sea of other mobile MMOs out there? Let’s find out.

You play the role of a mercenary group leader who must defeat everyone in his way to get to Phoenix Corporation; an evil organization which has full control of Selva De Fuego and its lifesaving serum. Since every mercenary and government organization is also trying to invade Selva De Fuego to destroy Phoenix, it’s full on modern warfare in 2037.

As a sequel to the popular MMORTS Soldiers Inc which was released back in 2013 for web browsers, Mobile Warfare features significantly improved graphics. This is how modern mobile strategy games are expected to look and Mobile Warfare does a pretty good job at maintaining those standards. In particular, you will enjoy the motion-captured movements of the in-game heroes who display surprisingly accurate animations at times. Just don’t expect PC-grade graphics from a mobile game and you should be satisfied with the quality of the visuals in Mobile Warfare.

You collect resources, build your base, and upgrade your buildings and troops until your army becomes as strong as it can be. There will also be a lot of base defending and attacking involved in the form of PvP and PvE battles. This is pretty much the standard stuff you will find in most other MMORTS games as well. However, Soldiers Inc: Mobile Warfare keeps things interesting with multiple missions and objectives that always keep players engaged.

The most prominent differentiating factor which sets Mobile Warfare apart from others in its genre is the hands off approach. A lot of us do not have much time on our hands for video games during the course of a busy day and that’s where Mobile Warfare shines because it doesn’t require as much time and attention as most other multiplayer strategy games do. A few minutes every once in a while supported by occasional in-app purchases to keep the upgrades coming in fast is all that it requires. If you want a more interactive and time-consuming experience, though, the gameplay structure may not seem as appealing to you. On the other hand, what will appeal universally to everyone is Mobile Warfare’s excellent and useful alliance system where you can start your own alliance or rise through the ranks of an already existing one.

This is particularly a problem with beginners but the game has covered this nicely. The learning curve isn’t too steep at all, thanks to helpful tutorials right from the first time you start the game. Even when you have learned the basics of Soldiers Inc: Mobile Warfare, the game keeps you well informed about everything with helpful tips that can be turned off when you want. Even if you are a veteran of the genre, the tips help in getting you acquainted with the slight variations that are unique to each game.

Granted that Soldiers Inc: Mobile Warfare doesn’t exactly do something new, it still is a solid performer in the MMORTS genre. MW is the perfect game for the armchair general who would rather concentrate on the long term and intricate strategies of warfare than the immediate gratification of constant interaction with in-game elements. If you are starting out in the genre, Mobile Warfare is a good game to begin with and even if you have played a few of these before, it’s definitely worth trying this one out as well.

The game is available for download from both the Google Play Store and the Apple App Store.