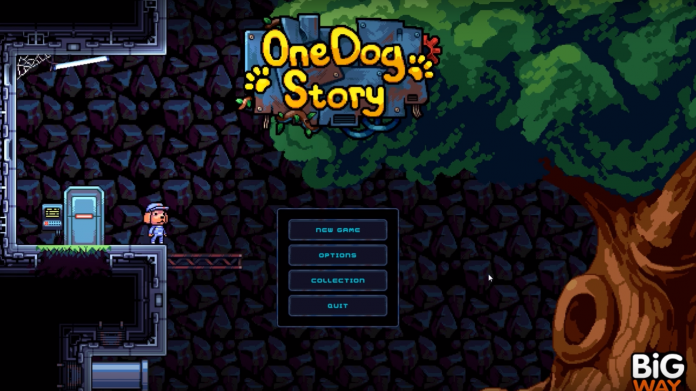 You feel the cold embrace of water. You’re barely conscious. A sudden sound comes from above you. An alarm of some sort, perhaps? You feel a shift, and a crack in the wall forms. The water drains out and – wait, that was no wall. You were in a glass tube. You slip out, finding yourself to be in some sort of laboratory. A red alarm on ceiling continued to wail loudly. You notice letters at the base of the tube you were in – they read “EO-43”. You open a nearby access door and set out to discover what exactly is going on…

And thus the story of one dog begins. One Dog Story is an interesting game. At first glance you’d think it’s a cutesy platformer because of the anthropomorphic dog protagonist, but it’s actually a pretty deep game. That whole intro up there? Sounds straight out of a sci-fi story or something, doesn’t it? Except instead of some super powered experiment or mutated monstrosity you’re a… dog. A humanoid dog in a janitor outfit. The unique setup drew me in and I was interested to see where this game was going to go. 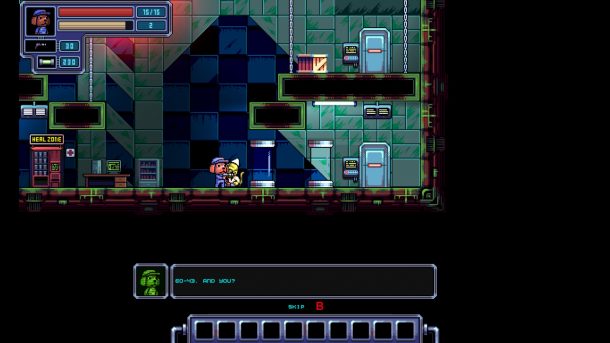 One Dog Story‘s gameplay consists of exploring Metroid-like levels. You’ll quickly find out that things have gone severely wrong in this lab, as there are hostile mutant creatures lurking around every corner. You’ll gain a bat from one of the scientist survivors, and eventually find ranged weapons. Slain enemies drop little tubes of mutagen which you can spend to upgrade weapons, restore health, and even save the game. The upgrade system in this game is lifted almost straight out of Cave Story; spending mutagen to upgrade your weapons increases the amount of damage they inflict, but taking damage will result in them losing power. Lose enough power and the weapon will drop a level, making you re-upgrade the weapon. If they were going to go with this mechanic I wish they would’ve just taken it completely from Cave Story. In that game enemies dropped experience crystals which powered up your weapons on the spot, saving the time of you having to find an upgrade station.

A couple minutes in after fighting some enemies with the bat is where One Dog Story’s problems begin to arise. For starters, the camera is a little too “free”. The camera will pan to whichever direction EO-43 is looking in to give you a better view, including up and down if you’re holding those directions. The camera never feels rigid enough because it’s flying around all over the place. There will be times where you’ll need to look back and forth repeatedly on small platforms and this is where the camera will be at its worst. It’s a minor problem overall but it makes navigating the environments a little dizzying. 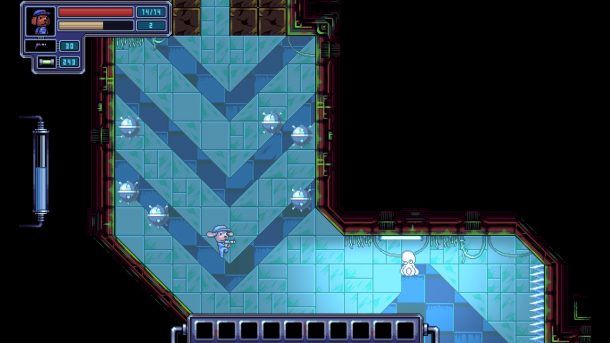 Secondly, back to the bat. Melee combat in this game is incredibly risky. On top of the choppy animations for attacks, enemy hitboxes need some fine-tuning. There were countless times where we were nicked by something we were far away from. You’ll encounter this problem sometimes with the smaller enemies but you’ll feel it full force with some of the bosses.

Speaking of the bosses – they’re kind of all over the place. Take our advice and don’t play the game on Hard mode, at least for your first run through. The aforementioned hitbox problems along with the Cave Story-esque weapon leveling system is going to cause some frustration. Visually, the bosses are amazing. One Dog Story’s sprite work is great and the bosses really pop out. Gameplay and design wise? Not so much. (Minor spoilers) Take for example the first boss, a giant mutant blob resting in a machine above you. It goes back and forth and tries to shoot you with its mounted cannon. Its only other method of attack is an indirect one in that it spawns little mutant blobs to pester you everytime you land a hit on it. You find a pistol not too far into the game, and when upgraded all the way it shoots a 3-round burst. When we shot the boss with our pistol, it’d drop in three slimes right on top of each other. Obviously the game wants you to practice control by not unloading on the boss too much, but this was just an exercise in tedium. The first boss had way too much health, and because we had to stop every other couple of shots to clear out the little slimes, the fight ended up lasting well over fifteen minutes. 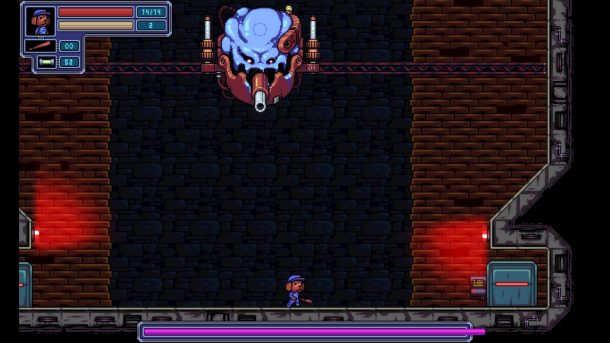 Unfortunately, tedious is a good word to describe most of One Dog Story’s combat encounters. Messy hitboxes, strange enemy placement, and bosses that overstay their welcome all lead into a dull experience. The story at least has a pretty interesting setup, and you’ll be waiting to find out the truth behind EO-43’s history. What was not as interesting were the many computers and logs lying around. Almost every other room contained some sort of diary or log that you could read through to get a better understanding of the situation at hand and the lore of the world. There are so many of these logs early on leading us to get overwhelmed with vague background info. Eventually we just started forgetting names, codes, and more because it was just too much. Occasionally there are some moments in the game where you’ll need to make a choice that can alter some paths you take, which is pretty interesting.

The sound design is pretty solid. Most of the background music in One Dog Story is pretty tame and quiet, but it’s perfect for the mysterious and hostile atmosphere the game is trying to build up. When crazy stuff starts to happen – like bosses showing up – the music ramps up and gets some loud horns straight out of a bombastic adventure movie. There are some retro chiptune sound effects here and there but they serve to equal out the balance between serious atmosphere and the cutesy nature of EO-43’s character. 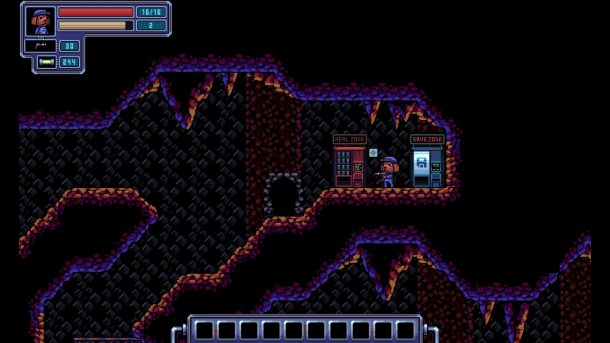 One Dog Story start out with an ambitious goal: tell a sci-fi story of a lab experiment gone wrong not through the eyes of a grizzled survivor but of a humanoid dog. It succeeds in telling an interesting story and while the gameplay is decent, it’s ultimately bogged down by the dodgy platforming, messy hitboxes, and mundane combat.