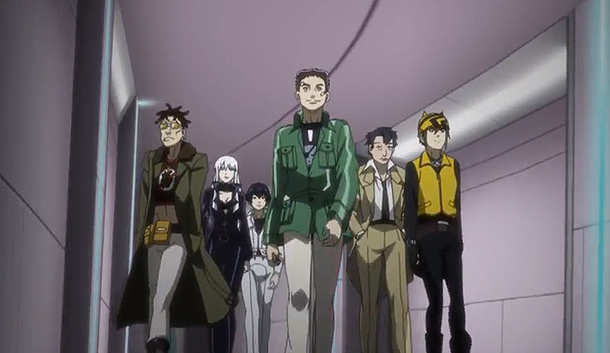 Having recently completed the 3DS port of “Shin Megami Tensei: Devil Summoner: Soul Hackers“, I thought that I would share my thoughts on the game. I should note that I am a fan of Atlus and their “Shin Megami Tensei” games, so though I always try to remain objective, I may not always succeed.

The game places you in the role of a hacker (this hacker has no default name, but the novelization of the game calls him Keiji Minegishi) that is in a group called Spookies. The other members of this group include your childhood friend, Hitomi, who becomes possessed by a mysterious female devil named Nemissa. The way to tell who is in control of the body, Hitomi or Nemissa, is by looking at the hair; Nemissa will instantly cause the hair to turn silver.

Next up is the leader of your group, a man that goes by the name “Spooky”. He is only 25, but looks much older due to being a heavy smoker. He also has a rather strong inferiority complex.

Junnosuke Kitagawa, also known as Lunch, makes up the third member of the group. He specializes in hacking and modifying hardware, and tends to take on things one step at a time. Lunch has issues with his father.

The fourth member is Shingo Sako, or Six. He is a bit of a gun maniac, though he has little combat experience. Six is only 17 years old, making him the youngest member of the group, and carries a painful memory about his sister with him.

Yūichi Haga is the final member of your little hacker group. Yūichi grew up in a wealthy family, and, perhaps as a result, has a childlike nature. He is a year older than Six, but Six still treats him like a child. He is eager to prove himself to the group.

With the cast explained, we’ll move on to the story. You have managed to hack your way into the new MMORPG known as Paradigm X. It seems like a regular MMO… until you begin getting messages threatening to steal your very soul. Luckily, however, you are saved by a creature named Kinap, who takes the form of several animals. Kinap sends you on vision quests, where you live out the last moments of several souls, gaining new information. You end up utilizing this information to help your investigation into the mysteries occurring in the real world. As you solve these mysteries, you learn more and more about the company Algon Soft, which created the new MMORPG, Paradigm X. You also learn of a mysterious group called the Phantom Society. What do these two groups have to do with each other? Can you figure out the truth and stop the devious plans at work, or will you fall in your mission?

The gameplay itself is standard “Shin Megami Tensei” fare. You can speak to demons (though some demons won’t speak with you unless you have a certain chip installed in your comp) and attempt to get them to join you, or you can simply fight through. If you fight, you choose all of your party’s actions at once, then the game utilizes each person’s (and demon’s) agi attribute to decide who goes first. The battle system varies a bit from the normal “SMT” style, however, as each demon has its own personality type. This personality trait determines what actions will raise their loyalty and what actions they may refuse to do. For instance, Kind demons love to heal people, and will usually rebel (at least if their loyalty is not high enough) if you command them to injure something. Wild demons love to injure things physically, but detest magic. In addition, the personality determines what, if anything, demons may do in certain situations. If a Kind demon is loyal enough, for example, it may save you from a lethal hit, allowing you to fight on (if your main character dies, it’s game over).

The maps are rather straightforward in many cases (at least compared to earlier titles), so fans of the older games may not be happy with some of the maps.

The final thing to note, though perhaps it is one of the more interesting elements of the game, is the ability to modify your comp. It has 5 slots, which you can plug various chips into. These chips have a variety of functions, including allowing you to save anywhere in the game. You can also change the game’s difficulty at any time, which several have taken advantage of (while they were playing Hard mode). On the lower difficulty, most demons in the Compendium cost quite a bit less (exceptions are the Element and Mitama races).

Overall, I rather enjoyed the story and gameplay, especially when I would get defeated several times in a row (I tend to love difficult games, and this did not disappoint).