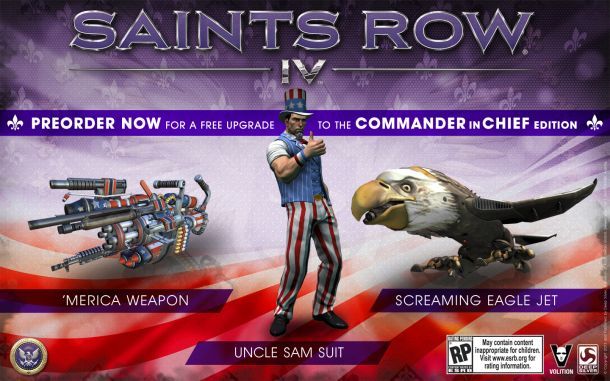 Deep Silver, the new publishers of the Saints Row series of video games, is a promising publisher. Many news sites and video game reviewers have much hope in the publisher, that they can bring the exciting and entertaining game to new heights. Saints Row III did not fail to live up to expectations, and I myself am looking forward to the 4th installment as well. Today, Deep Silver announced that there are pre-order bonuses for the upcoming game which is slated to be released on August 20, 2013.

Anyone who pre-orders the game at participating retailers in North America will be automatically upgraded to the amazing Commander-in-Chief Edition of the game. The game features an in-game weapon named the Screaming Eagle that “fires rockets out of its talons and can invoke the ‘Sonic Scream’ attack, which leaves all the enemies it hits dazed, confused, and likely scarred for life.” 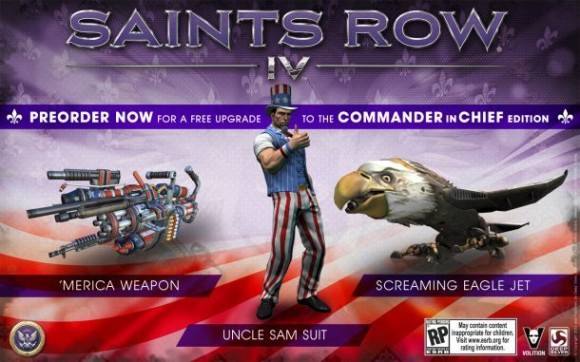 The Commander-in-Chief Edition of the game also includes a limited edition Uncle Sam costume for your character in-game. It also includes another weapon, the ‘Merica weapon’ is described as “full of incredibly astonishing firepower: flamethrowers, ultra-powered dub step guns and rocket launchers.”

This edition of the game will cost $49.99 on PC in America. The game seems very promising, and we are all looking forward to it.