Earlier in the month Respawn began searching out cheaters in Titanfall, and has taken their own measures to deal with them.

The developer had been using FairFight to collect data and detect those who were cheating on the PC version of Titanfall since the game launched at the start of the month.

In a post on their website, Respawn has announced they are now rolling out their own spin on dealing with cheaters. You will know you have been caught cheating if on the Private Lobby screen you see a message in red stating FairFight: Cheat detected on the right side of the screen (see image below). If this does not come up you are safe. 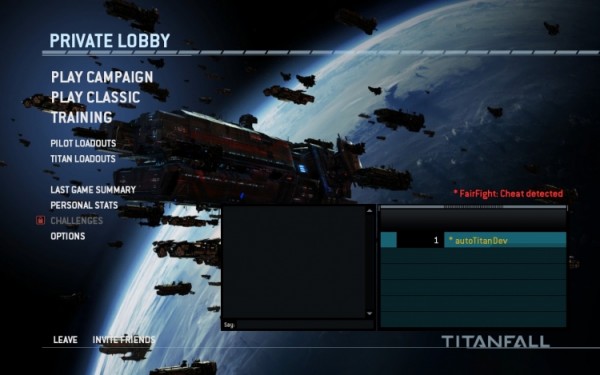 However, those with the message on their screen will not be banned. Respawn is allowing its cheaters to continue playing Titanfall, but in something that they describe as ‘The Wimbledon of aimbot contests’. Cheaters will be placed in lobbies which will contain only those caught cheating. Being all heart, Respawn also wished those banned all the best:

“Hopefully the aimbot cheat you paid for really is the best, or these all-cheater matches could be frustrating for you. Good luck.”

They have also made it so cheaters cannot join their friends who aren’t banned. Instead it will treat everyone in the party as though they have been banned and will be sent to the cheat games as long as that person is still in the party.

“If you stop inviting your cheater friend, you will once again get to play with the non-cheater population.” Respawn noted, you will only be banned for cheating if you were actually cheating, rather than just playing with a cheater.

Respawn have set up an email to deal with people who believe they have been banned unfairly: anticheat@respawn.com.

What are your thoughts on Respawn’s approach to cheaters?