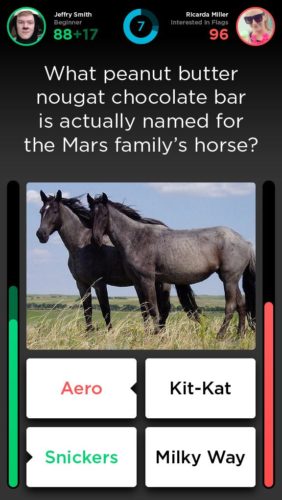 QuizUp, a real-time multiplayer trivia game developed by Plain Vanilla Games, nets over a million downloads in its first week of release. The Icelandic company based in Reykjavik was formed in 2010, and has slowly been working their way up the competitive iOS ladder. The developers behind Moogies, which won the award for Best Nordic Children’s Game of the Year in 2012, have a strong hold on the first place spot on the iTunes free apps chart this week, gaining about 1.5 million users since its release on November 7th, 2013.

QuizUp, as mentioned earlier, is a trivia game where players can test their wit against an opponent in real-time, whether they are friends of yours or a personally matched player that matches your level and rank. With over 300 topics to choose from, players have a large variety of game topics to challenge their friends with. Everything ranging from typical topics like US States and Logos to slightly less typical topics such as Justin Bieber and How I Met Your Mother. The game allows contributors to submit 10 sample questions that they personally have a lot of experience with, giving the game an in-depth knowledge on topics that the team at Plain Vanilla Games probably would not have been able to create by themselves without long hours of research.

The developers are planning on creating more content and fixes for the game, such as large, friends-only tournaments and new game contents, such as quizzes which uses standardized testing questions, allowing students studying for SATs and GMATs a chance to have fun and study at the same time.

If you want more information on QuizUp, or want to download the game, check out the site here. Do you think QuizUp will hold its first place position, or will it slowly fade away? Let us know in the comments below.