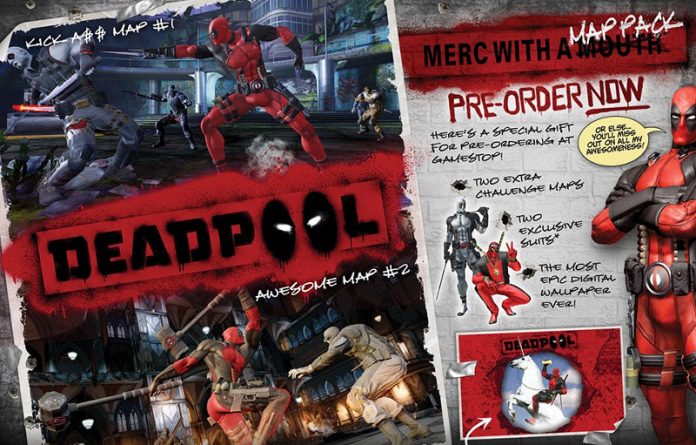 In a blog post today, “Deadpool” outlined the bonuses fans will receive if they preorder the upcoming game.

Those that purchase the title from either EB Games or Gamestop will receive a copy of the DLC “Merc with a Map Pack,” which adds two new maps – GRT Plaza and Inside the Tower – to the challenge mode of the game. Players will also get access two the D-Pooly and Uncanny X-Force suits, which may be used to customise Deadpool in the Infinity mode of the game.

Those that pre-order the game in a US EB Games or Gamestop will also receive a digital poster showing of Deadpool. In a move seeming to be becoming more and more prevalent amongst publishers, Activision have created an incentive to get others to preorder. The company has promised that the US store which receives the most preorders will have a live appearance by Deadpool at the midnight release.

Fans can also opt to preorder the game from Amazon, which nets them $5 worth of credit for a Deadpool comic book purchased from the site. Those that purcahse from Amazon will also receive the digital wallpaper, as well as a digital version of the game’s coversleeve.

Deadpool will be released on the 25th of June.