Bioware and Electronic Arts have released the final artwork for the box cover of Mass Effect 2, the upcoming and highly anticipated sequel that will take Shepard’s story to the next level. The game’s PC cover features, naturally, Shepard in the spotlight, but also two characters (Human and Krogan) following him. Not to mention the fact that the human character is HOT!

Check out the PC box art for Mass Effect 2 below (click on it for a bigger view) and try to hold down a little: you won’t get the game until early 2010, unfortunately. 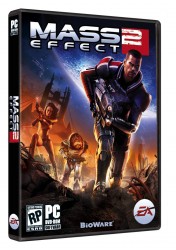