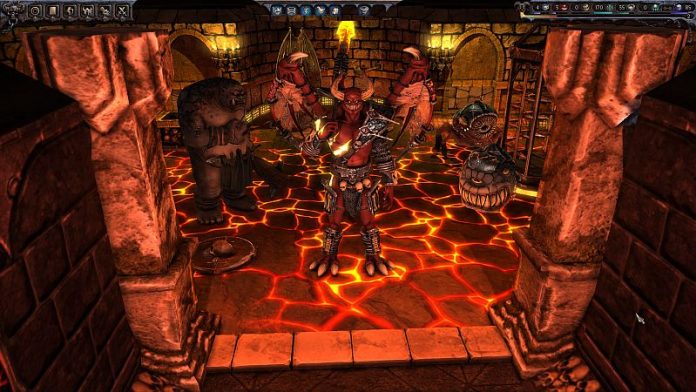 Cyanide Studios and Paradox Interactive have released Impire, a strategy game like no other that challenges you to control the meanest imp out there (actually a demon trapped in an imp’s body), get your revenge and get back to your hellish form because, well, nobody likes to be an imp!

Impire tells the Impudent tale of Baal-Abaddon, an Impatient and Impulsive demon Imprisoned in an Impractical Imp body by the Impotent and Impaired sorcerer, Oscar van Fairweather. The situation is Imperfect, but not Impossible; Baal will have to Improvise to Impress allies, Impede and Impale raiding parties of Impolite heroes, and Improve his Impish body to reclaim his Imperial throne. So are you ready to take this apparently impossible quest?

I am sure you are, and Impire is the game to offer you all that goodness, plus much more:

– Incarnate a demon of the abyss; make him evolve into a powerful dungeon lord and customize him through weapon and armor upgrades.
– Dig your own dungeon, build different types rooms, and craft wicked traps to stop your enemies.
– Beat up the heroes who attempt to thwart your plans, or even better, crush their souls and use them as resources to build up your dungeon.
– Recruit a vast array of creatures, level them up, and upgrade their equipment.
– Terrorize the surface of Ardania by raiding different locations, collecting treasures and riches along the way.
– Unlock unique magical item cards and mix and match them to build a deck that suits your playing style.
– Play the campaign in solo or in coop mode; or confront friends in different multiplayer game modes.

So if you’re interested in this game, head over to the Paradox Web Shop and get yourself some Impire!