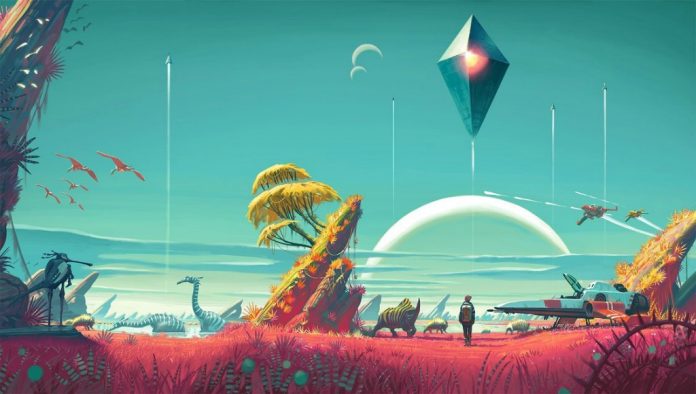 No Man’s Sky has been quite possibly one of the most anticipated titles over the past year. The massively open-world game set throughout the far reaches of space will encourage mass exploration from players, claiming that not any one player could discover the entirety of the game due to it’s pure vastness. With this undoubtedly marvellous title coming to PlayStation 4 exclusively next month (August 10th), Hello Games are taunting players with teasers about features within No Man’s Sky they haven’t shown off yet.

According to audio director, Paul Weir’s tease at the Sonar D+ conference in Barcelona, alongside tremendous exploration, No Man’s Sky will feature a levelling system of sorts that has not yet been displayed in the gameplay shown to players to date. Although Weir was there to talk about his area of expertise in particular, he confirmed the levelling up system upon stating what other features the many anxious fans could expect from the game upon release. His words directly were:

“There’s weather systems, ecosystems, and your job is to explore them, to gather resources, to have adventures, to avoid being attacked by the creatures, to level up – there’s a whole levelling up mechanic which we haven’t actually shown publicly yet.”

This is a great thing to hear on account of the fact the only real complaints i’ve heard to date in regards to No Man’s Sky is to do with it not having displayed a levelling up feature, negating the feel of progression in such a game. It is reassuring to know that Hello Games has tried to cover all aspects of what is incorporated in a long-term addictive game and tied them all together for No Man’s Sky. With this we can only assume that there is plenty more undiscovered features to be unveiled within this game that’ll make it all the more enjoyable, if that’s possible of course.

Furthermore, Hello Games have unveiled that they looked to a math-rock band from Sheffield, 65daysofstatic to score the extensive soundtrack required for No Man’s Sky. Band member Paul understands what video game soundtracks are expected to sound like:

“Procedurally generated music is something we’ve been interested in for a while,” says band member Paul Wolinski. “But the way it tends to play out is that most generated stuff in computer games tends towards ambience: quite granular, soft, synthy stuff the music’s never sure what action it’s about to be soundtracking.”

With all the bars being set higher in regards to No Man’s Sky that has more planets and places to explore than you have fingers, toes, limbs and so on, this issue was made a more prominent one for the band:

“We decided on a two-pronged attack,” Paul Wolinski says. “We recorded linear stand-alone compositions, because we want the record to be worthwhile in its own right, but at the same time we collected a big sound library of individual sounds, instruments, melodies and beats.”

Difficulties aside, hard work and determination prevailed and the band had a hell of a good time composing the soundtrack.