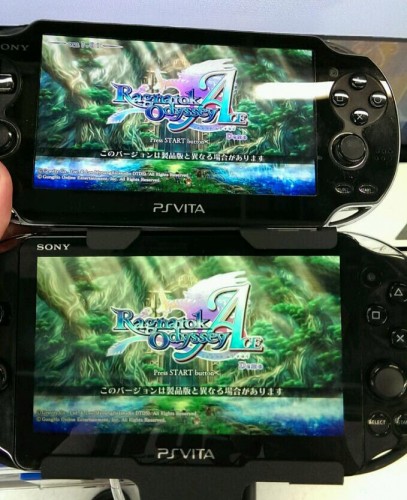 Earlier this week Sony announced a brand new version of their video game handheld, PS Vita. The new update will sport an LCD screen in lieu of an OLED screen that can be found in current models. The new version, dubbed Vita 2000, will also be 20 percent thinner, 15 percent lighter, and will be available in six different colors. The new model, which was only announced for Japan for now, will cost roughly 18,980 Yen or about $190. The new model is set to launch on October 10.

What is interesting about the news is the inclusion of an LCD screen. This led people to speculate on the quality of the LCD screen and if it’ll be a major step down from the gorgeous OLED screen. Naturally, several pictures of side by side comparisons of these two screens were posted online. By way of NeoGAF and user Hi Hop, a side by side photo was posted. The original OLED screen is at the top and the new LCD screen is on the bottom. The game on show is Uncharted: Golden Abyss.

The color scheme, birghtness, and sharpness seems to be better on the original OLED screen than the LCD screen. However, it should be noted that this is just a photo, the actual real life results could vary and differ. But by looking at the picture it seems as though our biggest fears have come true.

Another interesting thing is that the LCD screen seems to be much wider than the OLED screen; even though the new model is reportedly lighter and thinner.