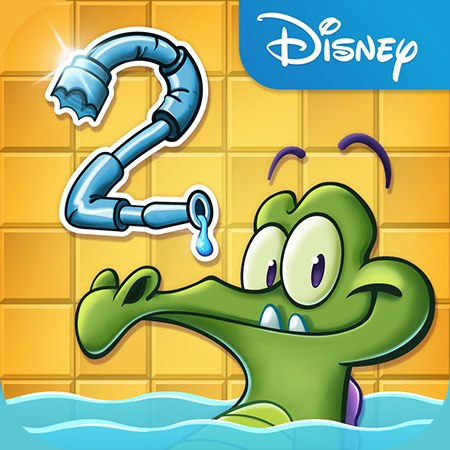 The sequel to the popular water physics game by Disney has been released. Where’s My Water? 2 brings back your favorite characters and 3 brand new locations. Players cut through obstacles to guide water to the final destination. New power ups and new mods have been included, updating the experience from the first game. Where’s My Water? 2 is a free game but includes in-app purchases for power-ups and energy refills.

This week’s creative game is Strata. Runner up for Most Innovated Game Design on the Indie Showcase at Casual Connect 2013, this visually interesting and mentally challenging. Players have to layer colored ribbons to match a pattern in a series of puzzles more difficult than the last. Strata includes five sets of puzzles, each set having a different grid size. Currently rated 5-stars, you can get this game on the App Store for $.99 USD.

The Best of The Rest

Fast food company Chipotle have jumped into the mobile game business with the game Chipotle Scarecrow. Players play as The Scarecrow trying to defend the City of Plenty from giant robot crows through 4 unique levels. Using tilt and touch controls, players can earn real life rewards of a free burrito. Chipotle Scarecrow is available for free.

Do you like space and zombies? Well developer BulkyPix has the game for you! With a title ripped off from Dead Space and Mass Effect, the FPS game Dead Effect hit the App Store this week. Players are a member of Unit 13 and have awoken from hibernation in deep space. They wander around the ship fighting zombies, earning money and collecting weapons in over 5 hours of gameplay. You can purchase Dead Effect for $3.99 on the App Store.

More zombies you say? Well Armor Games have released Infectonator: Hot Chase. A sequel to the hit flash game, players play as zombies chasing down humans trying to infect them. There are new zombies with awesome powers to unlock, upgrades to the zombies you own, and of the course the pixel graphics from the first game. This game is currently free on the App Store.

Stay tuned for next week’s round up of the newest iOS games.