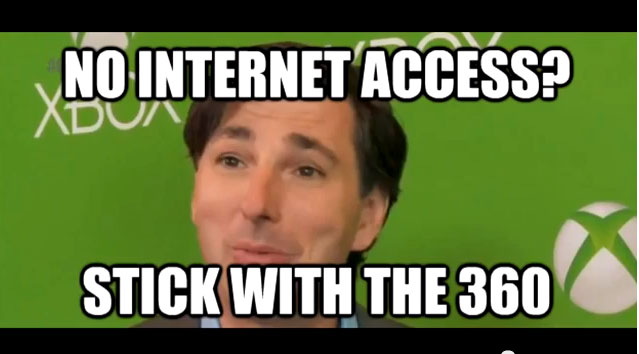 During an E3 interview with Geoff Keighley of GameTrailers.com, XBox chief Don Mattrick responded to those concerned about the XBox One requiring an internet connection every 24 hours by revealing a console for those unable to get online.

Don Mattrick: “Fortunately, we have a product for people who aren’t able to get some form of connectivity, it’s called Xbox 360.”

Geoff Keighley: “Right, so stick with 360, that’s your message if you don’t [inaudible] like it?”

Mattrick: “Well, if you have zero access to the internet, that is an offline device…”

After a little research, I learned that XBox 360 already has a huge line up of games available in stores and the console is relatively cheap. Maybe Microsoft should have focused on this device instead of that XBox One thing, whose features this year have had a tendency to get one-upped by Sony this year.