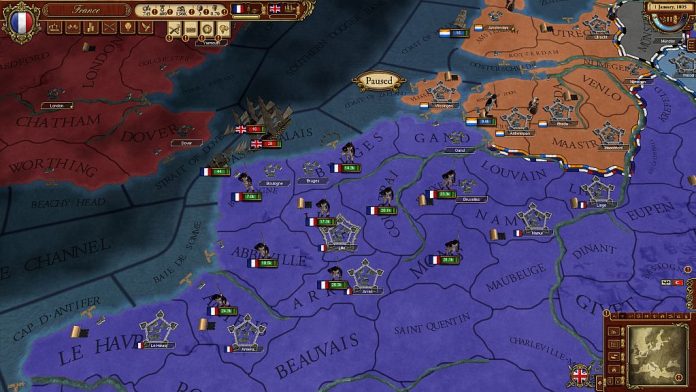 It’s the year 1805 and Europe is yours to be shaped as you please. Or, better said, to be shaped according to your skills. Ladies and gentlemen, this March of the Eagles, a hardcore strategy game from Paradox Interactive, a game that those who loved to dip their toes into the warm waters of Hearts of Iron or Crusader Kings were eagerly anticipating.

And for them, all I can say is that it was completely worth the wait! For everybody else, if you’re not used to in house-bred titles from Paradox, prepare to be blown away and most likely proven that you know nothing about real time strategy and war games!

Taking place during a very short time era (for a RTS title), during the Napoleonic Wars (1805 – 1820), your goal is simple: take leadership of any of Europe’s countries, from the big powers like Great Britain, France, Russia and so on, to the smaller provinces who must fight to survive the times when borders are not certain and alliances are not always what they seem to be.

I like to consider March of the Eagles the Football Manager of war games: there are tons of statistics and charts and text and beautiful tactical possibilities and approaches that you will simply feel overwhelmed. My first game was chaotic, even after playing the tutorial which simply can’t go through all the features and options in the game. But it was a nice experience and helped me get the hang of things and prepared me for my ultimate goal: to conquer Europe (which is still to happen, but I am sure I won’t take long now). 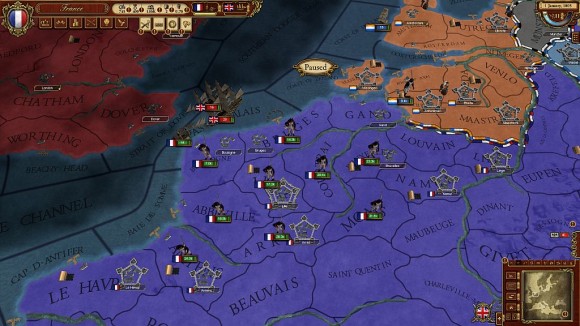 Gameplay wise, in case you haven’t played a Paradox title lately, it’s all about strategy and tactics and planning: with a system that’s extremely deep and complex, you control everything about your nation, from the economic aspect to troop production and management. Being a war game, your main focus will be the army, but you have to find the right balance because you can’t have a great army without a solid economy.

Diplomacy comes into play and there are a host of options available to you, from creating alliances to aiding your allies and other countries with bags of gold or real troops, requesting help from them or simply refusing to help them at all, which wouldn’t be too smart at all because your time will come to need help.

What makes the game even more challenging and interesting is the fact that it has such a limited time span: playing for “just” 15 years (the game ends in 1820 no matter what) also means that you have to move quickly, plan ahead and know exactly what you have to do. Which you probably won’t be able to do during your first play session, but don’t worry – nobody can conquer Europe from the first go! 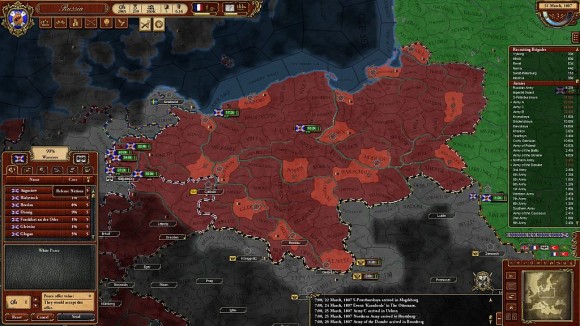 Multiplayer is something March of the Eagles brings to the war game and I think you can only imagine how cool the feeling of playing against real humans can be in such a complex and deep strategy game. Unfortunately, setting up the game is a bit more difficult here and you’ll probably have to go to forums to find people to play with unless you have a bunch of friends who own the game, but let me tell you that it is completely worth it – no AI can match the skill (or lack of it) of a human mind, nor its randomness and wow factor. Multiplayer in March of the Eagles simply doubles the game’s value, so you have to get past the obstacles and play a multiplayer game.

The graphics are not really the top selling point of March of the Eagles, but all the time that was not spent creating shiny cakes for the screen was invested in polishing the strategy aspect of the title and that is exactly what you should care about in this game, and nothing more. You don’t play to see your musketeer KO that Russian soldier, you play to control and command a large scale invasion of Europe and for that the visuals are more than enough.

All in all, March of the Eagles is a brilliant game that makes you feel brilliant whenever you manage to bring down a country. The level of strategy is grand, the game itself is challenging and feels as real as it gets: one wrong move can cost you the war and one bad decision can take you 10 years back. And in a game that lasts for just 15 years, that is a lot.

So do yourself a favor – especially if you are a fan of completely hardcore war games and strategy titles, or at least are willing to give them a try – and get March of the Eagles. Conquer Europe, polish your skills, then go for a multiplayer game. Then check the box near “Satisfaction level: 100%”