Heroes of the Realm is a browser based online card game, where players can build unique armies composed by hero cards. This OGplanet’s title conjures three distinctive gaming styles: the city building; the turn based fighting experience and the card disposal. The idea seems stimulating but somewhat bizarre too – mixing game genres in a very restricted realm, which is the browser gaming world, can quickly become a threat for the game’s overall performance. And if the player doesn’t approve the gameplay mechanism, the game won’t succeed well enough to keep living a long life. However, OGplanet has done a fine job in this field; I won’t say the game is exceptionally good because there are many features that could have been more refined but it’s not dreadful either – the building system is ordinary, the fighting system is very prosaic; what really makes a difference here is the card system, which in my opinion offers endless possibilities.

The beginning of the game allows you to choose one of the three available realms: Venizin, Kiriti and Adriago. There’s just one minor difference between the factions, which is about the resource production bonus. Once you’ve picked your lord and province’s name you’ll be redirected to an empty land surrounded by woods and a river, it’s when your journey starts. Heroes of the Realm owns a very friendly interface and guiding system, if you prefer to explore the game by yourself you still can do it, nevertheless you’ll always have the opportunity to read game tips, teaching guides and quest details during your experience.

In order to establish an estate you’ll need to build and expand your province. Besides the common construction list such as houses, farms, mines, warehouses and forges, you can also rise up special buildings – the oracle, the portal, the temple, the arena and the mystic are a few examples. Each structure has its own perseverance but to generate a complex town, first you’ll need to guarantee essential materials, which are gold, food, ore and mana stones. Those resources are not merely used to construct, they’re needed for daily activities too, you won’t be able to run battle if you don’t have enough of those currencies. Energy is another element that affects everything you do in game, without energy you’re totally tied up, you can’t even build but don’t worry, energy refills itself every few minutes and you can produce it as well. The last currency in this game is the soul stones and they’re used to purchase cards at the oracle; this is normally an extremely hard to get currency, so think twice before spending it all. Collecting cards isn’t as easy as it seems, especially when there’s more than two hundred obtainable cards. Cards in this game are the synonym of heroes; your army is made of card champions. Everything can be enhanced and upgraded in this game – buildings, cards, attributes, gear even passive actions, such as decreasing the construction time. 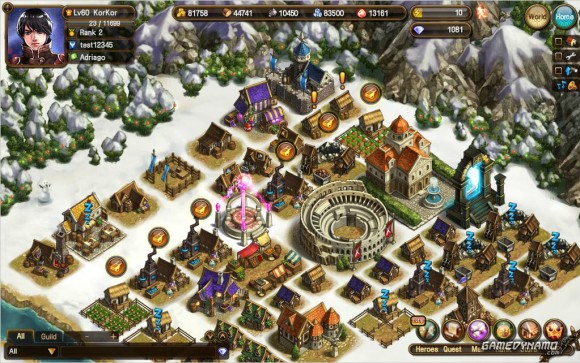 Creating an army is the easiest thing in Heroes of the Realm. However, creating a strong and synergic army can become a true challenge. Each champion has a race, genre, class, group, horoscope and skills. Now, every section has potential interactions between cards and respective bonuses. For example, if you have three wind heroes in your army you’ll receive bonuses. The hero’s horoscope generates buffs too, if there’s a compatible horoscope in the party, they’ll become stronger. Cards have five tiers, the more stars your card have, the stronger it is in power and the harder it is to get. Your champions can wear armors and weapons and all the gear can get enchanted with gems. So many choices… the customization level is very extraordinary in this game. You can build a pure damage archer, simply boost its strength but why not risk a critical hit archer by increasing luck?

Combining cards is a peculiar feature; even though you can’t mix tiers you always have a slight chance to obtain a better card.

You can customize your army in several ways – setting the formation of each champion and displaying the artificial intelligence setting are real possibilities. Meaning you can order your caster to attack low health targets or simply let him attack the closest target, the choice is yours – strategy plays a big role on formation and party actions. 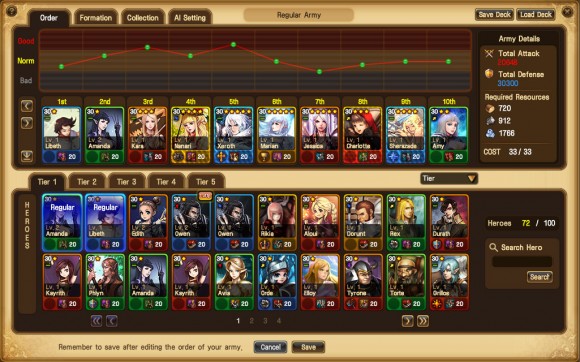 To execute environmental fights you need to have a portal and cross it to other lands. Each new land has fighting spots and difficulty modes, which are normal, difficult and heroic. Battling is basically the only way to level up your champions and yourself, as the lord. Each fight has a rate depending on your performance in the field; rewards depend on the battle rating and difficulty mode too. Questing in this game is unusual; you get quests for nearly everything, building new structures, executing a feature for the first time, increasing your battle performance… The turn base fighting mechanism makes the battling interaction quite tedious, just imagine twenty units fighting on a turn based mode. There’s a poor development in this section, spells are not displayed graphically and all you can see is common attacks coming with the same scream voices over and over.

When it comes to fighting other players, there are mainly two modes, the arena and the leagues. I’m not quite sure what the real difference is, you get a different ranking for each one but the battling features are the same.

Overall, the game seems way more promising than what it really is. I can’t deny it has many features, some of them displayed in a very enquiring way and you always have something to do as well but apart from the good looking asian style cards, this is just another building browser game.