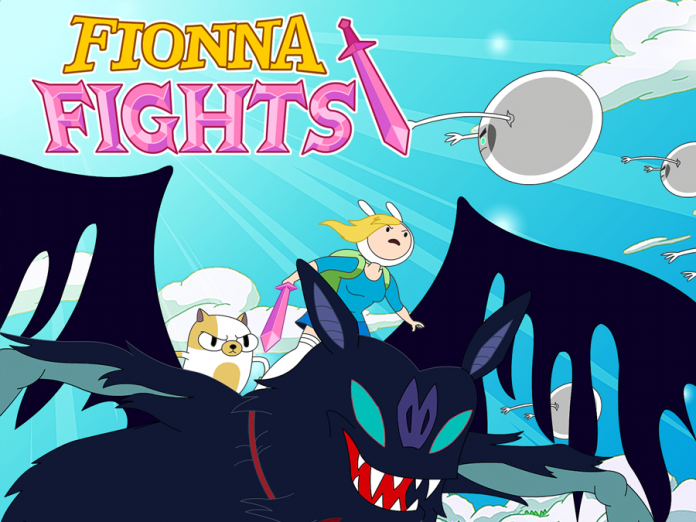 I’ll just start off by saying: I love Adventure Time. I love the characters, the setting, the randomness, the way it handles its bittersweet moments and character interactions; and I love it because it’s just plain fun to watch. To date, there have been a few flash games based on the series on Cartoon Network’s website, as well as a DS/3DS game titled Adventure Time: Hey Ice King! Why’d You Steal Our Garbage?! A couple of the flash games have made their way to iOS platforms; among these, is the newly released Fionna Fights, a game staring Fionna, the gender-swapped version of Finn from the Ice King’s fan fiction.

The story in Fionna Fights is a rather simple one that loosely coincides with the premiere of “Bad Little Boy”, the second Fionna and Cake episode in the cartoon; it follows along with Fionna and her vampire-lord friend Marshal Lee who are on their way to a friend’s party when they are attacked by swarms of enemies. Fionna, being the heroic type, quickly jumps at the fiends, slaying them one by one.

Fionna Fights has the player using the iOS device’s touch screen to tap on enemies causing Fionna to lunge quickly with her sword. Because the game takes place in the air, you must continuously attack enemies to remain afloat, which isn’t too problematic due to the sheer number of baddies rushing your way. You could theoretically attack just enough enemies to keep yourself airborne if it were not for an energy meter that drains with each subsequent enemy that makes it past you; your energy also drains slightly each time you miss an enemy with your attack. Once your energy is depleted, the game is over and you are taken to a screen that displays your final score and how many gems you have collected while playing. Gems can then be used to buy special weapons and items that will allow you to traverse the enemy laden skies much more efficiently and safely.

These purchasables range from swords with varying magical powers, to potions that aid in your mobility and defense, to special attacks such as making it rain knives or summoning a giant robot wielding a rocket launcher. Each of these items and weapons have three levels of potency that upon purchase will increase weapon damage/area of effect or an item’s duration. When I first started buying upgrades, I was a little confused at how you went about activating or equipping them. When you start a new game, you have nothing but your default sword; however, after attacking a few enemies you will notice a little bubble containing one of the purchased items floating by. If you attack this bubble you will automatically activate whatever was inside. Unfortunately, these effects are only temporary and will cease after just a few short moments, however, each purchase further increases the likelihood that an item or ability will appear and after you have bought a good amount you will find yourself within reach of an item quite often.

The whole point of Fionna Fights is to be supplementive to the show. It is meant to entertain fans with a simple, yet addicting premise that serves no real purpose other than reaching a high score and competing in the leaderboards. While it may take you a while to build up a decent amount of items to aid in your pursuit of highscoredom, I believe this is half the fun; once I had purchased all of the items I felt a significant drop in “fun factor”. Thankfully, there is an option to reset the game in the settings menu, and I will most likely be doing just that.

Whether or not you like Fionna Fights is probably based on how big of an Adventure Time fan you are, or how much you enjoy traditional arcade style games. I really had a lot of fun with this game; it’s a great way to kill a few minutes while you wait for your microwave to go off, or for your class to end. Fionna Fights is available right now via the App Store for a measly 99 cents, but if you’re still on the fence, or you simply don’t want to spend the money, you can check out the free web version here.