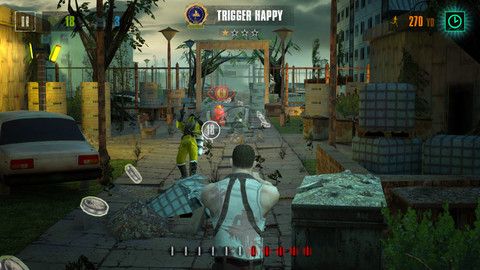 I’ve always loved the Die Hard movies. They were one of my first introductions to action movies and have long remained in my mind. With the new one out, but not getting the best reviews, we can at least download the mobile game and get to step into the shoes of… Jack McClane?

Yes, this endless runner based on the most recent movie, A Good Day to Die Hard, puts you in control not of Bruce Willis’ John McClane, but his son, Jack. Similar to Temple Run, you’re given a behind-the-shoulder view as Jack constantly runs through the ruined streets and buildings of Pripyat, jumping over obstacles, collecting Rubles, and shooting at Russians. In theory, the game has some sort of connection to the movie and its story, although considering I haven’t seen it, I can’t exactly judge on that.

The game certainly succeeds on its pick-up-and-play quality. It immediately launches you into a tutorial with the simple controls: swipe left and right to switch lanes, up to jump over obstacles, down to reload, and tap on enemies and objects to shoot them. It’s pretty easy to just start playing.  Unfortunately, there are parts of the game that are left out of the short tutorial. The missions given include performing Bullet Dodge and Melee kills, two features that are not brought up in the tutorial or anywhere that I found in the game. It was only through luck that I found out that Bullet Dodge just randomly happens when enemies shoot you, and Melee requires you to jump over obstacles into enemies.

In general, the missions are your standard fare of just doing things you would do normally. Jump over obstacles, shoot enemies, switch lanes.  There is a bit of reliance on more luck-based missions, like picking up so many weapon power-ups, but perseverance gets you through that. Completing missions gets you experience, and leveling up gives you a bit of the game’s premium currency, Bucks.

There is not a lack of things to buy. There’s health upgrades, weapon upgrades, different outfits for Jack, leveling up the characters you can switch to (sadly, you can not permanently select a character besides Jack), and buying checkpoints. This feature I found rather frustrating.  You have to spend 10 Bucks to unlock the checkpoint, and then 1000 Rubles each time you choose to use that checkpoint. Also alongside the missions, there are daily challenges and badges which act as achievements. This is a game that can last you a while.

Die Hard doesn’t exactly set the endless runner genre on fire, but it’s a perfectly fine game that’s easy to play and rather addictive. The lack of a virtual Bruce Willis certainly hurts the license, but it still stands on its own.