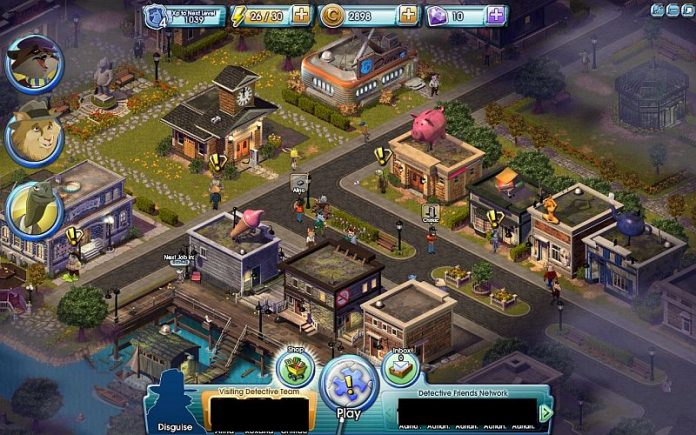 PopCap decided to join the race for the best hidden object game on Facebook with Hidden Agenda, a game that puts you in the shoes of a detective solving various cases in a city inhabited by shady characters. The game delivers some interesting bits of concept, possibly unique to the genre and this is always something to look for in a game!

I will start by saying that Hidden Agenda is a hidden object game for those who love this genre and have a lot of experience finding objects. This means that it’s on the rather challenging side, which is pretty nice because other games (Criminal Case comes to mind) decided to go for the easier approach. Unlike Criminal Case, Hidden Agenda is for hardcore hidden object players, with a lot of challenge sprinkled over all its stages.

There are two areas in which the game take place: first, we have the overview of the city, where the most important citizens are, ready to offer us missions and extra challenges, and then we have the actual hidden object scenes that have to be completed over and over again to gain stars and other goodies, before we’re able to complete the game.

I liked a lot the city in Hidden Agenda: unlike most other HO titles on Facebook that try to bring in some sort of city management into play, this game still focuses on the hidden object element. You have characters with icons above their head which can give you missions to find the hidden objects… in the city! A pretty nice and challenging way of dealing with things and getting items you need to complete quests. 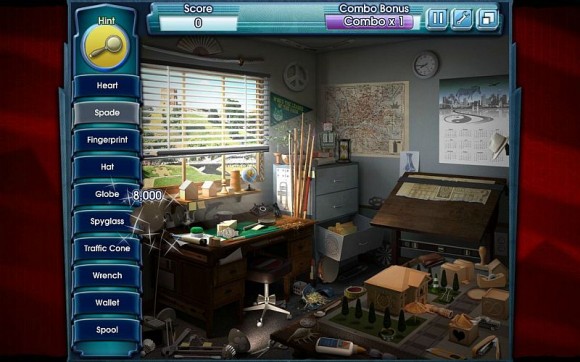 On the other hand, the actual Hidden Object scenes in Hidden Agenda are a place for the experts – at least if you decide that it’s time to get a high score: there are tons of items smartly hidden around, some of them really hard to spot. But not because of issues or problems or such – there is simply a ton of things to see and sometimes it will be very difficult to find what you’re looking for. We do have a hint that fills up regularly and is extremely helpful.

Once you master a scene by filling its meter up, you unlock two extra possible play modes: Timed (find as many objects as possible in 45 seconds) and Find the Difference, but these offer you nothing more than personal satisfaction and are not required to drive the game forward.

The problem with Hidden Agenda is that it has too many hidden object scenes and tends to focus more on the short and quite frustrating missions taking place in the city, in your quest to gather tons of items to complete quests. This kind of takes away the joy of the real game: the actual hidden scenes that we’re playing this game for in the first place. Of course, if you are really well organized, you won’t fall into this trap and waste all your energy in the city.

Visually, the game looks pretty good – not really the best eye candy out there, but acceptable and there are no problems with the graphics (items to small or something like that) to make it unplayable or upsetting.

All in all, Hidden Agenda is a really good hidden object game, extremely suitable to those who already play a lot of hidden object titles and won’t back up when it comes to complete a real challenge. Because, yes, Hidden Agenda is probably the most difficult HO game that I have played on Facebook – and it was time we had one like this!